First route of the season... maybe a new one? 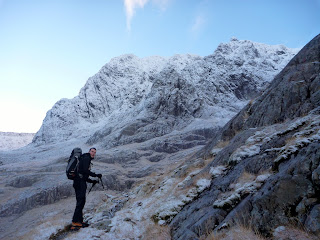 The walk in
Today Guy and I went up Ben Nevis with my shiny new tools to see what there was to see. We had our eyes on Gargoyle Wall which meant a repeat of the slog up to the top of Coire Na Ciste for Guy who climbed Archangel there with Kenny yesterday. The snow line had come down a bit from yesterday and the stones in the Allt a Mhuillin below the CIC hut were coated in ice. The powder on rubble walk in was a good bit of early season suffering as I reminded myself of how much heavier cold weather winter sacks are than summer climbing ones!

Guy set up off up Pitch 1 of Gargoyle Wall but it was soon obvious that the drop in temperatures had choked every crack with ice and this was hidden under plenty of powder. After over an hour of digging, with runners you wouldn't want to hang your coat on Guy found a thread and lowered off. 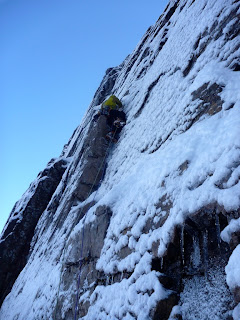 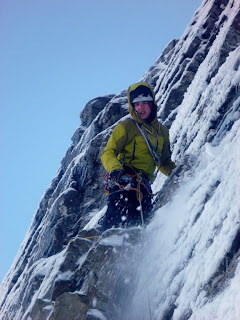 Guy digging for victory... and losing
We'd had a lovely morning with blue skies and a cloud inversion and although the weather was changing slowly we weren't ready to give up yet. So we quested up a powdery No.3 Gully past Winter Chimney (tried that before without ice.... shudder) and to the right hand side of the buttress forming its right wall. Here there was a ledge a short way above the gully and at its left side a pair of twin cracks. Guy set up the right hand crack and although the gear was better here it was a lot steeper than it looked from below. About 35m later it was my turn and I copied Guy in cutting loose on a good left axe in a very small crack on the left wall of the crack. A few good heaves and after some nice technical climbing I was traversing left along a ledge below Guy's grinning face. The second pitch was a similar length to the plateau but much easier. Guy reckoned his pitch merited V,6 and although short we'd give the route a star as the climbing was good; high steps to powerful moves on good hooks. I'll have to check with Andy N to see if its been done before. Its in a well visited area but with so much good climbing around there it may have not seen an ascent. Nice to hang on the Nomics on something steep and although the walk in was purgatorial and the belays cold there were no hot aches today (despite a wee hangover)! Hoorah for winter! 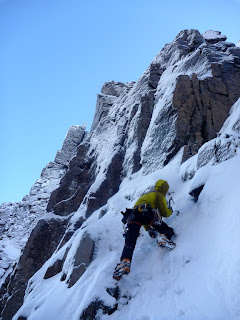 Heading to the twin cracks 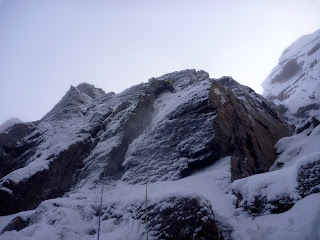 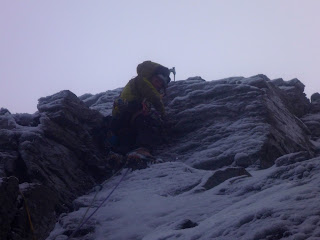 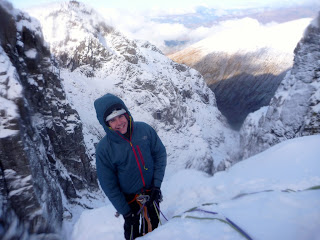 Guy in my new belay jacket 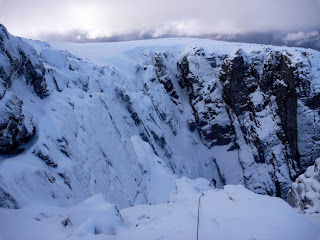 Looking back down the easy second pitch 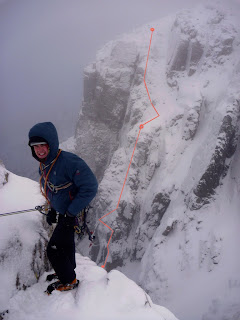 Abseiling into No. 3 Gully our route shown opposite 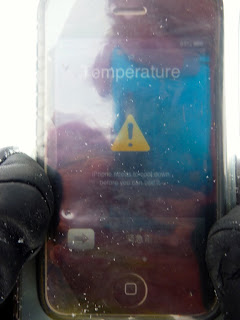 Bizarrely Guy's Iphone had overheated in his sack at the bottom of the crag. It was the only thing feeling hot today!
Posted by Alan at 17:16

Poor phone. How did that one get overheated with all the snow around? Great job on climbing up and down that mountain. May you have more mountains to climb and successful times ahead.