West coast granite. Another long walk for a short climb.

Jamie B and I were hoping to get high enough to find something frozen under the healthy dump of snow we've had for the last 2 days. The snow was down to 500m but it wasn't feeling too cold so we decided to check out a local cliff that neither of us had been to Mullach nan Coirean in the Mamores which is described in Mike's Guide as 'snowed up rock climbing'.
We sweated and slithered our way up the Coire through thick but wet snow and as we got up near the crags it still felt mild and the turf was useless. We passed several ridges below the main crag that would give great fun short granite routes (Lochaber's Creagan Coire Cha No?) and were getting prepared to admit defeat when it came to a route. At the very end though as we turned the last corner the change in aspect brought a change in conditions. The turf was no better but the crag was steep and rocky and that rock was white!
We were beneath Kindergarten corner (too hard for us at VII,8 but a strong line) and Kid Gloves IV on the arete which looked a goer. We climbed avoiding the turf but the holds were mostly on rock anyway with plenty of clearing needed lower down and good hooks and gear. I stopped half way up so that Jamie would get some climbing in (selfless aren't I) having had some pleasant moves in the rocky groove. This left Jamie to bridge up a chossy corner past suspect blocks and creaking flakes which I think he would quite happily have left to me!
As We climbed the second pitch the temperature rocketed and the rock was turning wet by the time I topped out and it was snowing big damp sticky flakes which were of course rain by the time we dropped back down to the forest.
The crag is a stiff flog up from the trees but no worse really than Stob Coire nan Lochan in Glencoe. The existing routes are short but space exists for much variation and mountaineering on the slightly lower buttresses to the left. 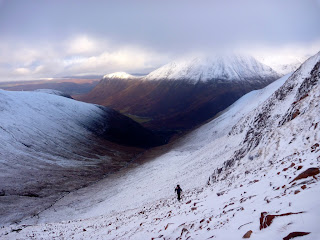 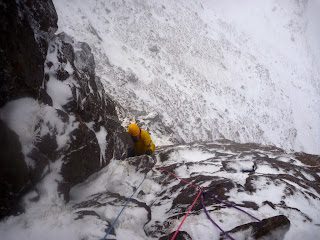 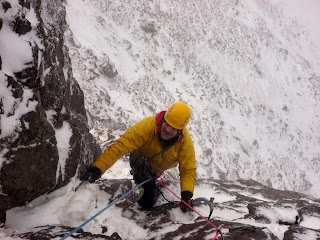 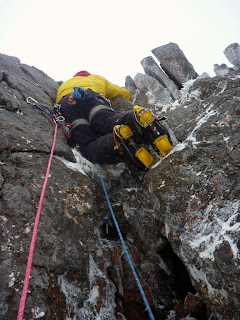 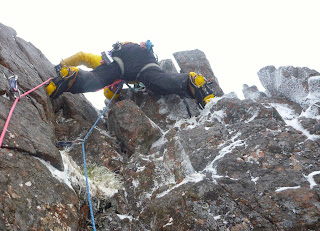 Better
Mega thaw due tonight onwards so it was good to hook tools to snowy rock whilst it was here and always good to visit a new venue.
Posted by Alan at 16:39

Congratulation for the great post. Those who come to read your Information will find lots of helpful and informative tips. Granite slabs

Wow what a great blog, i really enjoyed reading this, good luck in your work. India Granite

Congratulation for the great post. Those who come to read your Information will find lots of helpful and informative tips. White Marble

It was a very informative blog. I really loved this piece of content. Will be expecting the same type of content in the future. Granite and marbles

This information is really beneficial. Looking for more articles like this. Thanks for sharing this with us.