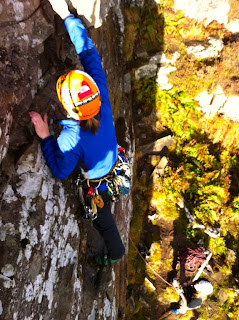 ...well actually I set a few but Sally and Kate dispatched them in short order. The students from UHI descended en masse on Kingussie Crag today and with some morning autumn sunshine in evidence Sal and Kate led routes and each was forced to escape the system and abseil to their second when they were incapacitated. Sal had to lower Kate on a damaged rope and then abseil the same line whilst Kate had to deal similarly with a knot where 2 ropes were joined together. Well done to the pair of them on this part of their assessment it was very obvious that they had been practising and their methodical measured approach to the problems paid off.
Posted by Alan at 20:22

Thanks for a wonderful share. Your article has proved your hard work and experience you have got in this field. Brilliant .i love it reading.

I really liked your Information. Keep up the good work. Best supplier of black galaxy granite

thanks for sharing this. keep it up.
Black Galaxy Granite