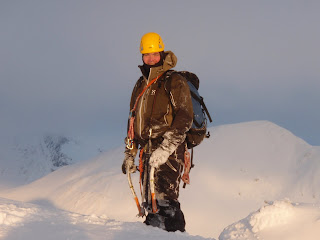 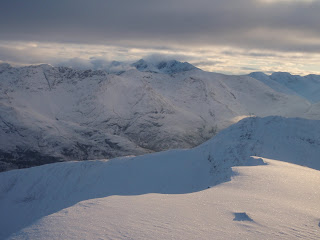 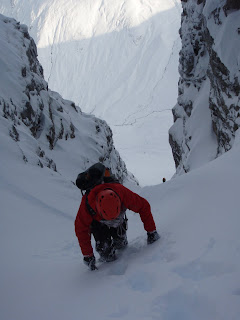 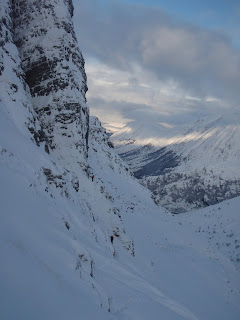 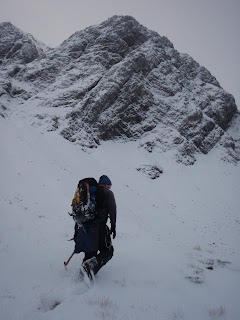 Jamie had the bright idea to go to Stob Ban today.... about the right height, less travelled mixed climbing, close to home... sounds good. Rich and I happily agreed. Wading through the knee deep snow on the approach path and tripping over the powder covered scree we began to wonder. Jamie backing off of Skyline Ridge ridge because of the loose blocks and turf that wasn't quite there and I was having serious doubts. To get higher we then went into South Gully and soon realised we had made a biiiiiig mistake. You know things are bad when you use your hands to dig enough snow away from your chest to make it only knee to thigh deep. We swam, dug, waded and swore our way up the gully keeping an eye out for grooves on the right that might look like good climbing opportunities (guidebook in the car...... of course). We were right up under the summit before a likely looking groove caught our eye. A glance at the watch sent me traversing into it from the left on a ledge where every step had to be excavated to see if it was air or solid snow. The guys tossed me the ropes and we were finally off and climbing.
More digging revealed some nice climbing and some creative bulldog and hex placement (and a very shallow tied off peg) got me to some solid rock and a couple of runners. Fortunately under the champagne powder there was some good turf and after 50m I found a semi hanging belay. Unfortunately it was only big enough for one so I brought the guys up to a ledge 10m lower and led off again (that's just how it worked out.... it wasn't planned..... honest guys). Another runner and 60m more climbing, the odd steep turfy step and a little compact quartzite and I'm belaying off of the summit cairn.
No sign of what we did in the guide, it was about IV maybe IV,5 at a push (or was that just because of the amount of digging to find the route? Who cares). We descended South Gully each on our own little avalanche cushion of snow in a matter of seconds and plodded back to the car.
Stob Ban (pointy white peak) was certainly white today! Sorry if the video doesn't contain much climbing- I was busy leading, digging or gasping!
Posted by Alan at 18:43