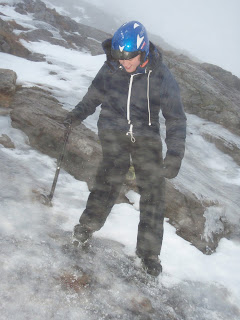 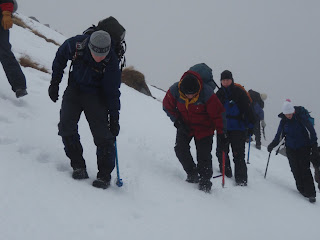 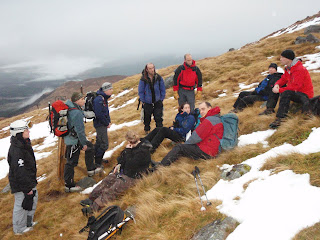 Today I was out on Aonach Mor working for BASP on their Ski Patrol Training Course . I was responsible for delivering a winter skills day which for some was a refresher and for others was a genuine introduction. Having taken the gondola up we left the top station heading for the Nid. It was immediately obvious that there was a huge amount of water ice around and a lot of frozen ground despite the snow having been stripped back. We looked at vital walking skills; the use of the boot and the axe for support, cuting steps and walking in crampons and the what to do in the event of a slip; self belay and self arrest. We discussed information gathering for avalanche avoidance and also looked at simple snow anchors; the bucket seat and body belay and a buried horizontal axe.
There was rain, turning to sleet and higher snow during the day- but not a great deal. At about 850-900m we hit the freezing level and the rocks were heavily rimed, bare rock almost completely obscured and lots of ice around.
Back at the gondola we bumped into Andy, Jonathon and Sandy (expect he'll have a report up when he gets home) who had done a new route on the east face. They said that Left Twin had been done in reportedly good condition and that whilst not exactly fat, there was plenty of ice on the east face.
Interesting the amount of frozen bare ground around, a good dusting of snow before it thaws could give good mixed conditions if places like Arrochar and the Bridge of Orchy hills are similar. Aonach Mor might be a good option for the weekend (gondolas at 9am- no early climbers gondola yet) providing the snow doesn't provide an avalanche hazard but I suspect that with this much rime and icearound rock gear will be hard to come by.
Posted by Alan at 18:03

apparently the gondola is half price on saturday-20 anniversary. may make use of it while its cheap!