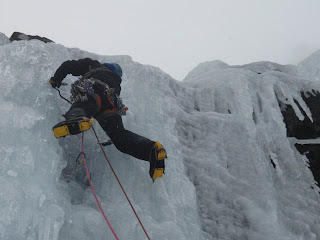 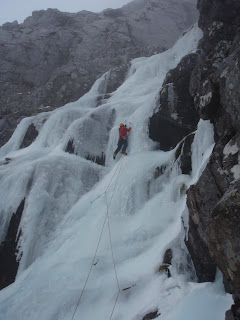 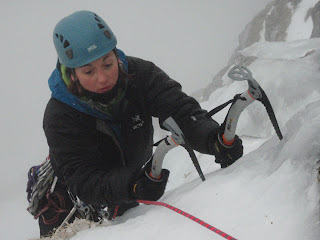 Rich, Dot (hope I don't catch your rotten cold) and I went to Ben Nevis today and although it was by turns, dreich and misty and mild we got a few good pitches of climbing in. We went to the lower part of Compression Cracks, the obvious icefall on the left of the Castle Coire seen well on the walk up to the CIC Hut. The ground was for the most part still frozen above above 700m, the snow varied from very firm to quite hollow (usually at the edge of snow patches or near rocks) and there was plenty of water ice about. The CIC Hut cascades are quite thin but would have offered some sport- we headed up nearer Castle Ridge and a short steep step brought us to the big obvious ice pitch visible from below.
Rich's turn to lead and he chose a steep pillar on the left of the fall. Much of the ice here was quite dry and brittle and there was a dusting of snow on it from the night before. After a good long pitch he belayed and brought Dot and I up. By this stage I was nursing an egg sized lump on my forearm from a piece of ice (my fault, poor choice of stance) and was grinning inanely whenever I tried to grip my right axe- it felt like my funny bone had been hit with a mallet!
The guys sorted the ropes whilst I rigged an ice screw thread anchor to abseil from (there are a couple of pegs further right but we wanted more climbing).
Back down and I led a good sustained pitch of climbing on the right of the fall (some wetter and much more hollow ice here but still good climbing and plenty of opportunity for good screws) back to the threads. Then it was time to make 2 abseils down to the foot of the route so that we could make it back to the car before dark.
Friends did a steep, thin and wet Quartzvein Scoop at Beinn Udhlaidh yesterday. Today there was a good deal of new rimeing above about 850m on Ben Nevis today but its all academic as we are due more freezing temperatures and snow on strong winds. Remember SAIS forecasts start tomorrow so read both the avalanche and weather forecasts before making a plan and be prepared to change everything based on what you see happening on the hill.