Testing the limits of Soft Shell! 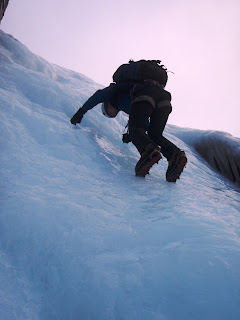 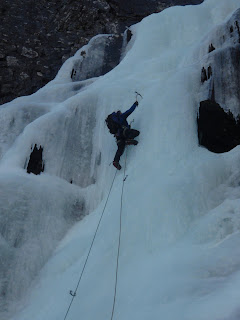 Dan on the ice pitch on Compression Crack 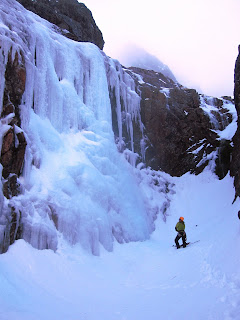 Me eyeing up the waterfall pitch 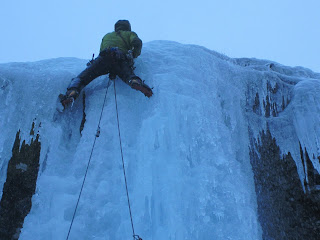 Note the stream of water flowing from my left boot! 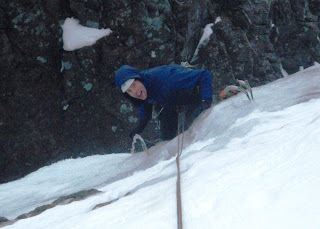 Today Dan and I ignored the mild weather and headed for Ben Nevis- it was mild.... very mild.... As we walked in the ice in the Castle Coire was so obvious that we went to Compression Crack, soloing up to the steep pitch for Dan to lead. We traversed right as we had seen a line of white from below but when we got there it looked very thin and bits were falling off. So we abseiled off some in situ gear into South Castle Gully, and climbed this to the top. We dropped down No. 4 Gully into Coire na Ciste. Roger and his team were on No.3 Gully Buttress and another party were starting up Glover's Chimney. We dropped down into the gorge beneath the Garadh to the pitch of ice i saw 2 days ago. To say it was wet was an understatement... it was like being in a shower... wearing a softshell. The water passed my shoulders and headed via my shorts to my boots. At the top I started placing a screw but when it was half way in the water pressure behind it drove the core out into my face leaving a jet like a water fountain (Dan took a drink on the way past). It was fun in a perverse way but I have to apologise in advance for the swearing on the video!
One party summed things up nicely by saying they backed off Green Gully as the ice on the first pitch had the consistency of butter... and it was that wet all the way to the summit.
Oh well, although we have lost a lot lower down there is still a lot of snow in the Gullys and the Coires. Bring on the Hogmanay freeze!

Compression Crack and Coire na Ciste 29 Dec 10 from Alan Halewood on Vimeo.
Posted by Alan at 19:14