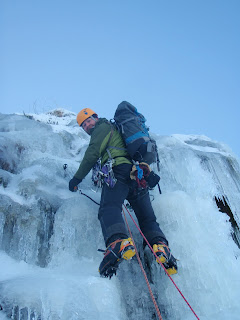 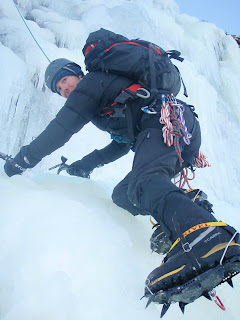 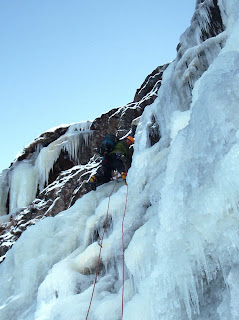 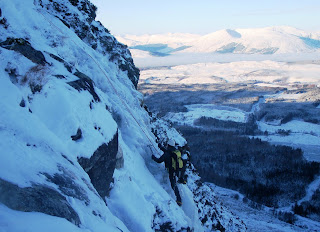 Nick and I were out again today and decided to go to see what sort of condition Finnisg-Aig Falls was in. I knew Bill was going there for a look too and after a false start or two their snow chains got him and Matt to the route ahead of us.
That made for a nice sociable day's climbing as we came up behind them. The lower sections that are often soloable were wet and too thin for us but we got 4x60m pitches of ice out of the route. It was sometimes wet, sometimes brittle and had some great cauliflower like formations- this all meant the climbing was quite friendly but the screws were a bit variable lower down.
All day long we were distracted by the blue skies and the mist trapped by the temperature inversion in the Glen below.
Even better as we walked down beside the route (you can get down the diagonal ramp 100m left of the route easily) I literally stumbled across the flask I lost 2 weeks ago buried in the snow- complete with icey ribena inside!
Shortest day of the year today- and one of the most lovely!
On a seperate note Petzl have information on their website on the problems that some users have reported with the grip rest on the new Nomics and Quark Ergos. They have a temporary fix and will replace tools affected next year. See here for information.