A short scramble on Ben Nevis 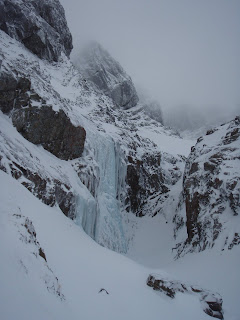 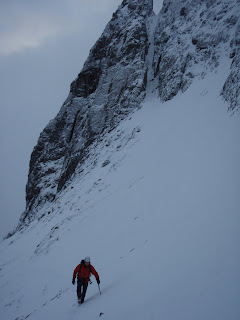 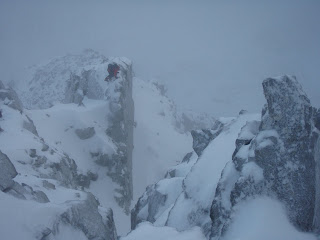 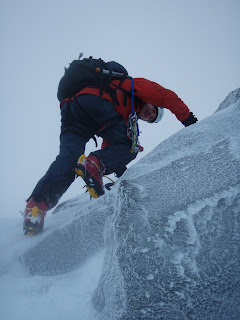 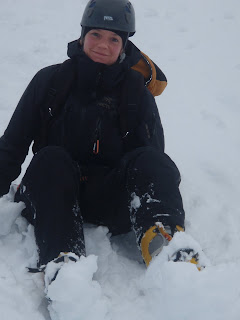 Today was my last day out with Oli and Gemma and we hoped to do Tower Ridge despite a less than inspiring forecast. After a brisk walk up a very icey path from Torlundy we were approaching the Douglas Boulder whn Gemma wisely let us know that she wasn't feeling great. With a route like Tower Ridge (and after fresh snow with no trail to follow) she sensibly didn't fancy it when feeling ill. We decided to stay together and have an easier day so we traversed beneath the Douglas Boulder, across the face of Coire na Ciste and over the top of Moonlight Gully Buttress. This let us cross No. 5 Gully at its narrowest point (which was also holding very little fresh snow at that point) to get onto Ledge Route. From the top of that we descended the Red Burn.
There hasn't been as much snow as the forecasts had led me to expect and on Ben Nevisthe localised winds have meant a deposition of windslab in isolated spots and often on unexpected aspects. Keep your wits about you folk and bear in mind even if the snow where you are seems ok you don't know what is going on in some of the basins higher above you.
Having said that higher mixed routes were well rimed and individual mid level ice pitches looked good (CIC Hut Cascades, first pitches of Waterfall Gully and Compression Cracks-beware the slopes above and below this, good ice in the gorges below Coire na Ciste (especially nice pillar below the Garadh although the ice in Garadh Gully itself looks a little buried)).
I've had a good 3 days out with Oli and Gemma despite them feeling a little off colour- if this is whatt they are capable of when they are sick I'd be quiote nervous of keeping up with them when they are fully fit! Cheers guys.

Mountaineering on Ben Nevis from Alan Halewood on Vimeo.