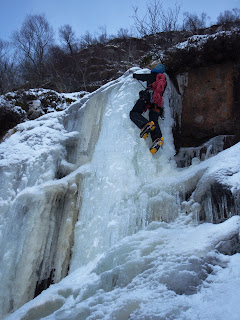 And on the steep finish 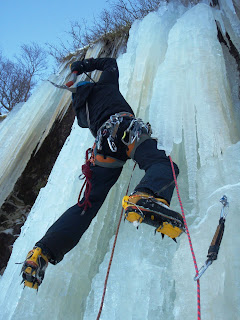 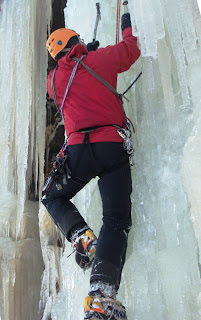 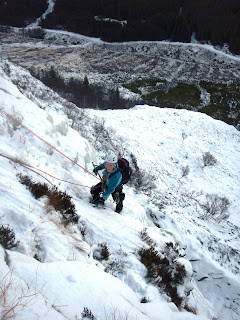 I talked Rich into walking past Finnisg-aig (which he has yet to do) in the hope of some more esoteric ice on the same face. Plan A was clearly broken at the top and pouring with water. We headed a long way up and further left and soloed a pitch of II/III to the base of a short pillar. I went for a look but it was too wet, too hollow and too detached for me to want to lead it. Rich placed a third screw on it but quickly decided that the chances of disaster were too high for him too. So an abseil later we were traversing back towards Finnisg-Aig and onto what I believe was Incidental Falls, John Lyall's IV from about 15 years ago. We soloed up some good steep steps until just short of the top. Here on the left is a fine vertical 20ft pillar. Rich's reward for giving in to my exploratory urges was to lead this (which is either a new finish or the steepest finish to a IV I've ever climbed- comparable to the steepest section of the Organ Pipes at the CIC Hut Falls).
We topped out and wandered towards the top of Finnisg-Aig Falls where we gave a team a hand who's leader had done all the climbing but run out of rope on steep ground before the anchor and helped a second team communicate when their leader came up a little short too. The beta is- belay on the last big ledge below the obvious final pitch, not at the base of the short step wall below!
A big well done today to the Turnernator for his second ascent of Dave Macleod's The Cathedral X,11- abley assisted by Kev Shields. Read about it on Andy's Blog and expect some photos soon.
Also I see Eas Anie was climbed on Friday and a big well done to Donald and Andy quietly tearing it up with some new big numbers.

The ice hunt from Alan Halewood on Vimeo.