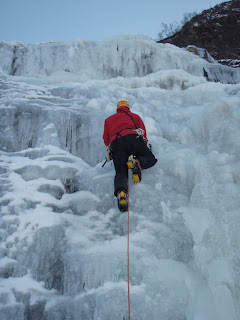 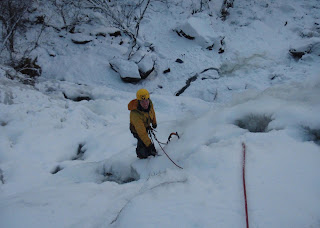 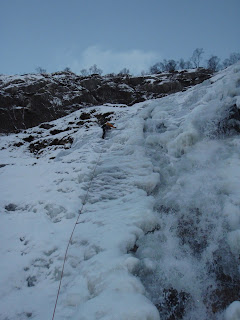 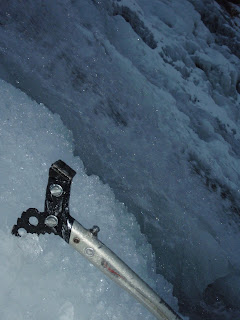 Couldn't find a partner today for a full day out (excuses like work, children to care for, college essays due, preparing for MIC Assessments and even skiing- where are people's priorities at I ask you ;-). Finally at lunchtime I managed to lure Graham from his books with the possibility of a little ice. A few locals have been wondering if An Steall Ban (The White Spout), or Steall Falls if you will, is in nick for climbing. So at 2 o'clock and after a sterling job of driving the icey roads to the Gorge car park G and I walked in to have a look. We met Donald from the Lochaber MRT who had been out for a walk and said that another team had climbed it but that things looked a little..... moist.
He was right. The Falls aren't as well frozen as New Year last year yet, in fact I can recommend a wet suit to any would be suitors. Nonetheless we had a climb (my boots, gloves, waterproofs,harness and rope are drying out as I write). There is enough ice to pick a way up but you would struggle to do it without a soaking and the mushy ice wasn't worth placing much gear in. The big ledge at the top of the first ropelength is a bit lumpy.... it looks as if the mini thaw a few days ago caused a collapse of the central part of the ice fall leaving a pile of piano sized blocks to belay from. We found enough ice to climb on the left but there are plenty of better options a little higher to go at just now and I reckon the thaw due at the end of the week will put the Falls out of play for a while.
I hear that a team today struggled up the bottom of No. 5 Gully towards Ledge Route in waist deep snow, eventually abandoning the effort because of deep uncolnsolidated powder and the odd patch of unstable windslab. The predicted change in weather at the end of the week could lead to very unstable conditions whether because of the thaw (if it goes g=high enough) or fresh snow- take care folks.

Soggy on Steall from Alan Halewood on Vimeo.