Bliss on the Ben

Today Jon drove over from Aviemore so we could hit Ben Nevis on our day off on what has tone the best climbing day in Lochaber this year. We had a leisurely start and then lingered kitting up in the sun too long as Konrad and co. nipped in front of us on our plan A- Observatory Ridge. Plenty left to go at. The Minus Face was busy as were all the usual ridges and there were French and North American accents ringing round he crags. We sweated up to Observatory Buttress in the sun. It gave us pretty good snow ice to climb and just enough proper ice for most of the belays to be ok. Jon started us off and also ended up walking us off the route and onto the plateau from my snow anchor on the very crest of the buttress- so no cornices to worry about for us. There are some enormous overhangs of snow up there at the moment.
It was mild on top other than the breeze. The Trig Pillar is somewhere under the snow, the 3 cairns that mark the change in bearing at the top of Gardyloo only just visible but none of the others were. No sign of the No.4 Cairn, just some footprints that disappeared over the edge and some large cracks a few feet back. Almost all of the Ciste Gullys seem to have avalanched in the last 24 hours and people were lucky to escape without more injuries when No.4 went today (well done LMRT again). Solar warming is still taking its toll of those cornices- watch out!
We walked down chatting to Sam and Tony from Jagged Globe and at the Red Burn one of the last of the many teams to ascend Tower ridge today said the snow was getting very soft at the end (we watched several avalanches today caused by king sized bed sized plates of ice peeling off steep walls on the Great Tower in the sun- one swept part of the Eastern Traverse).
So nice to feel the sun all day rather than glimpse it through a rapidly moving cloud. Softshell all day and I sweated!
Lots of pics today- and they are worth it! 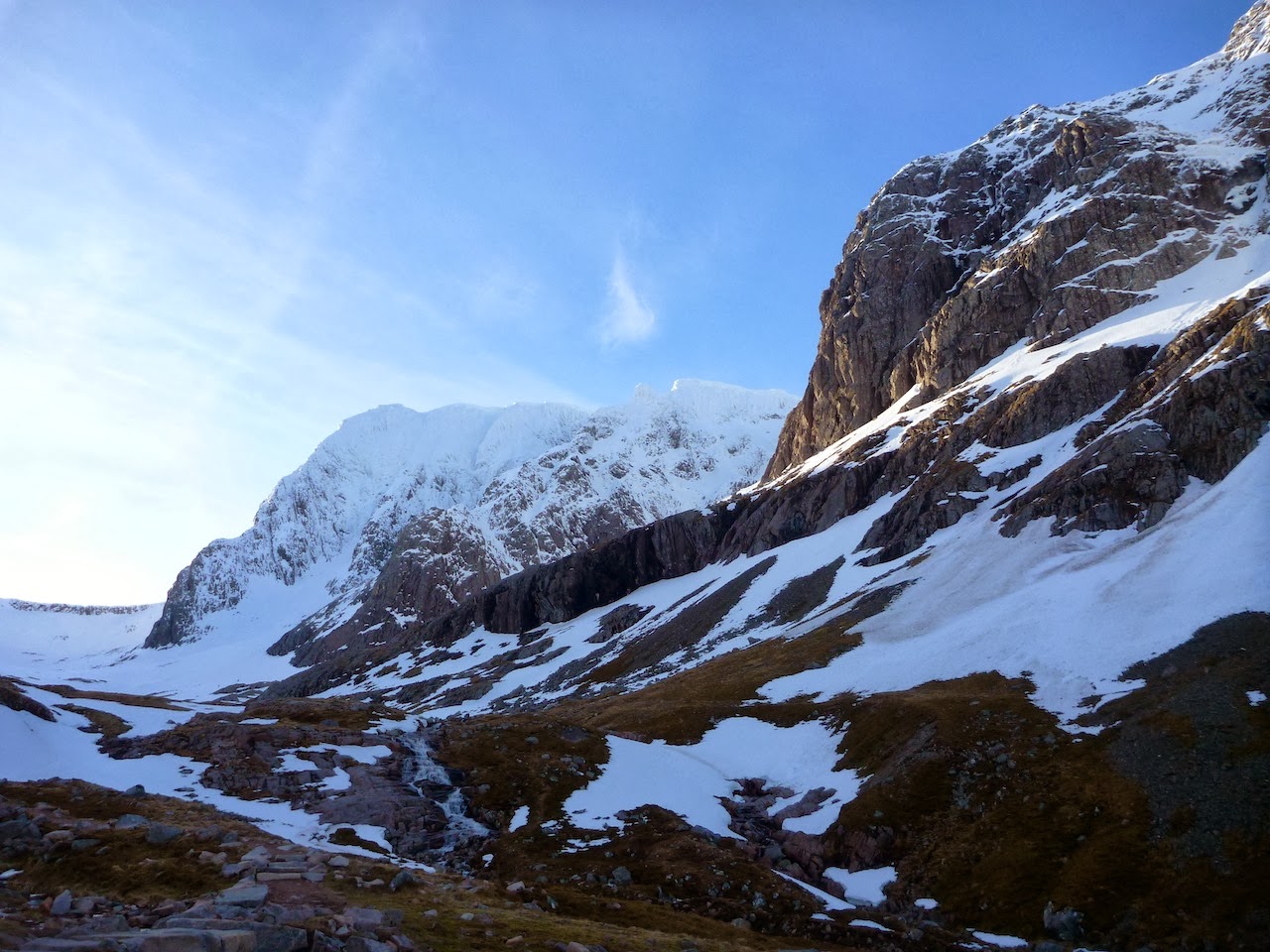 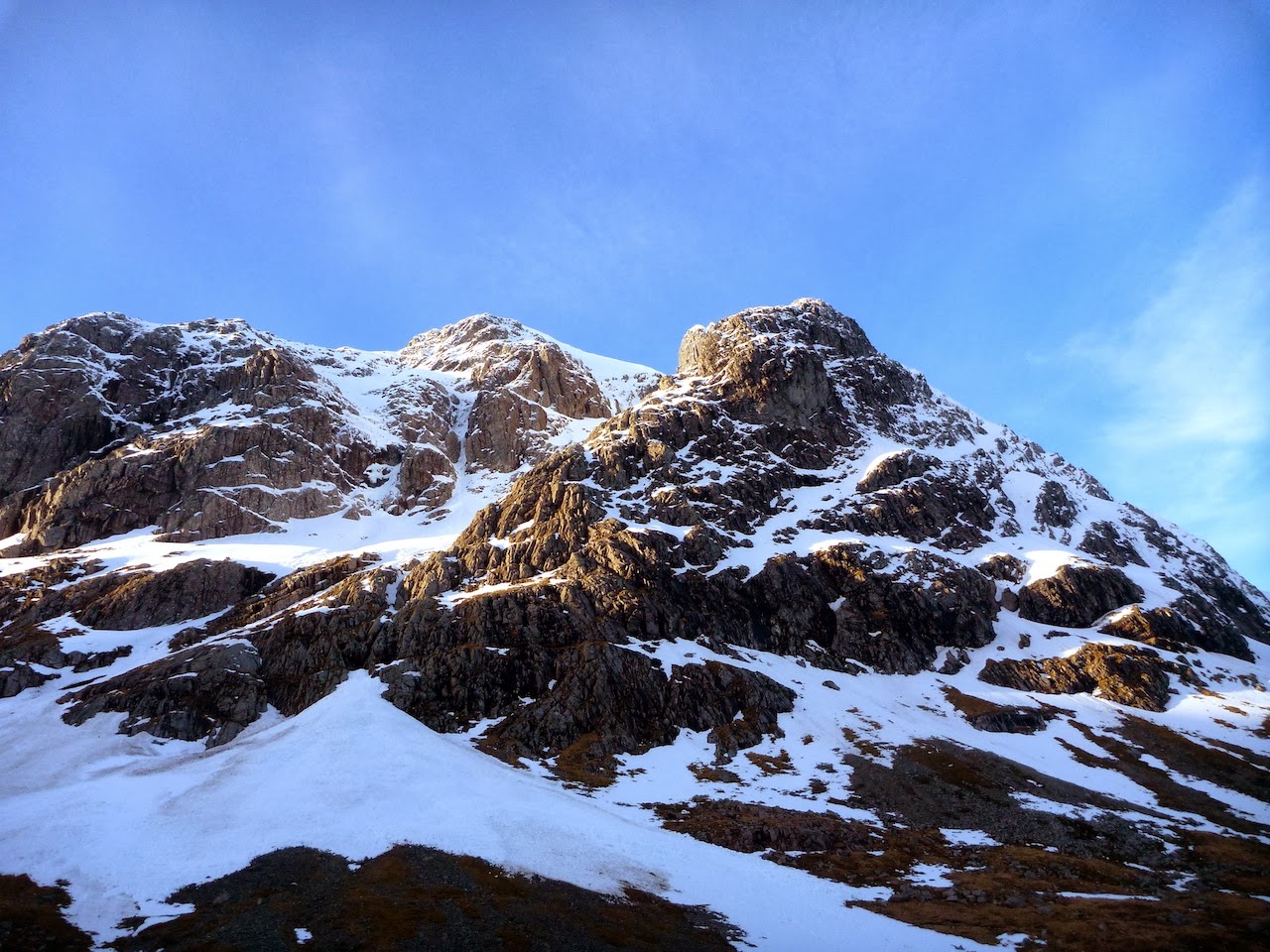 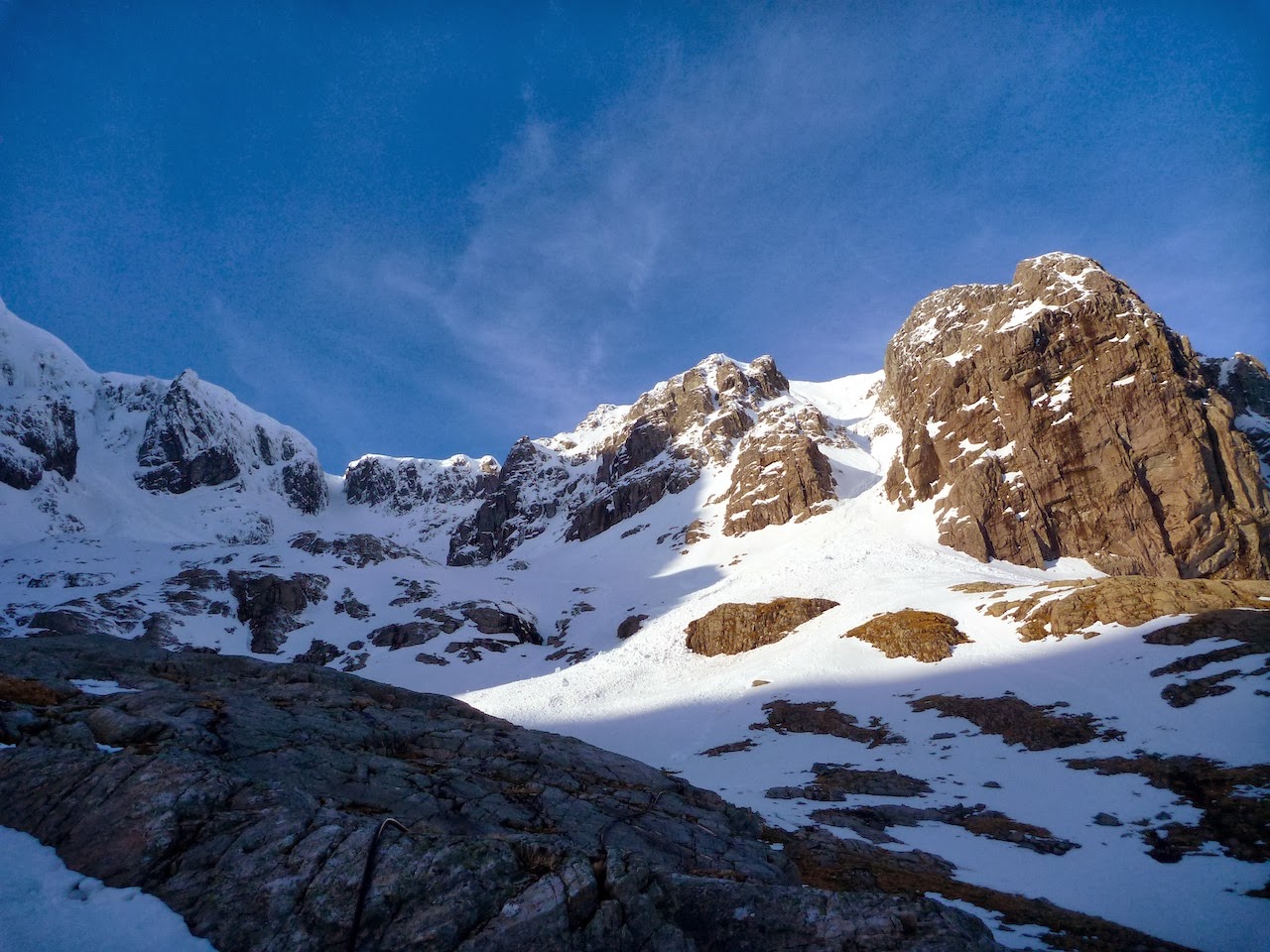 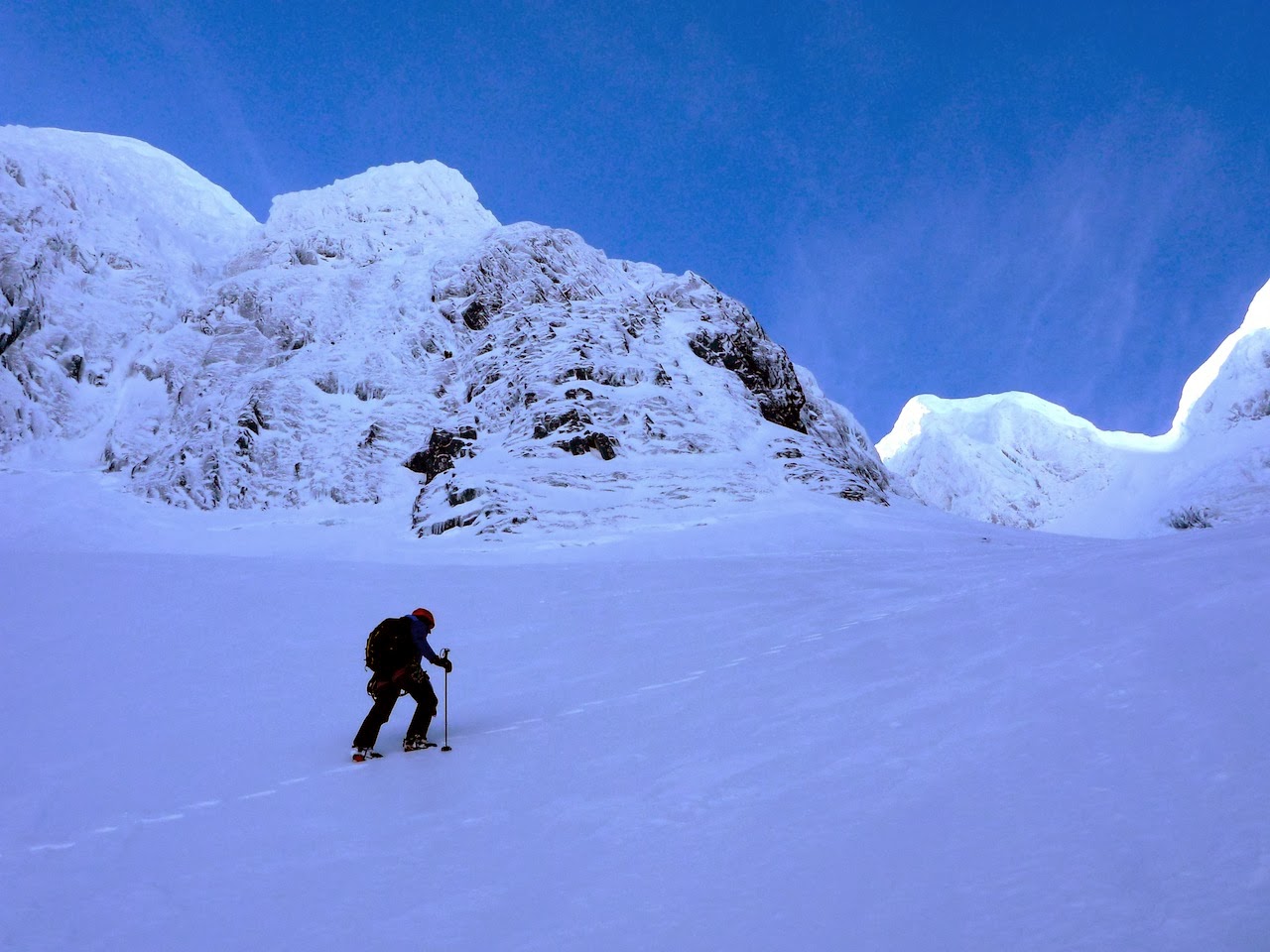 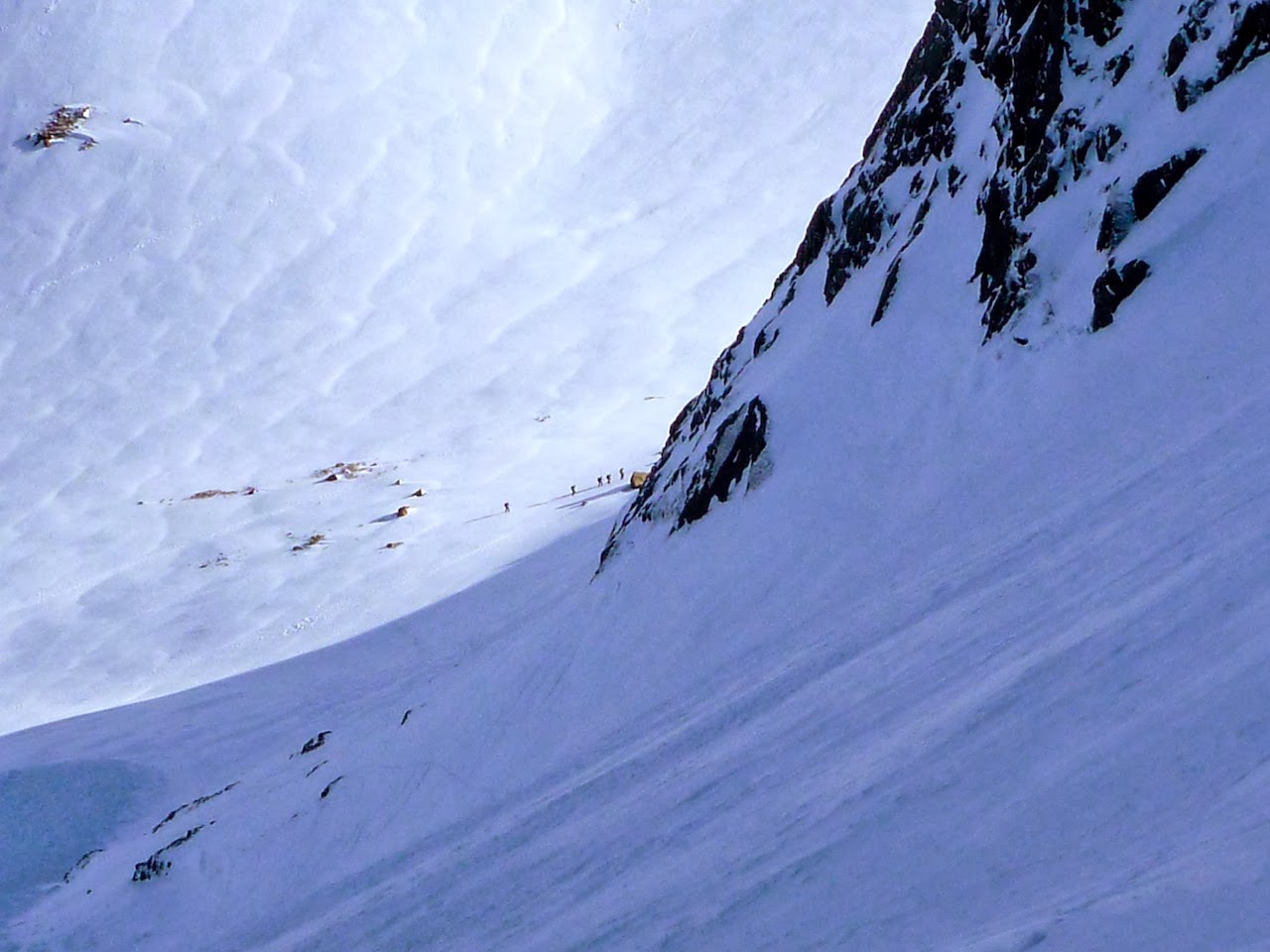 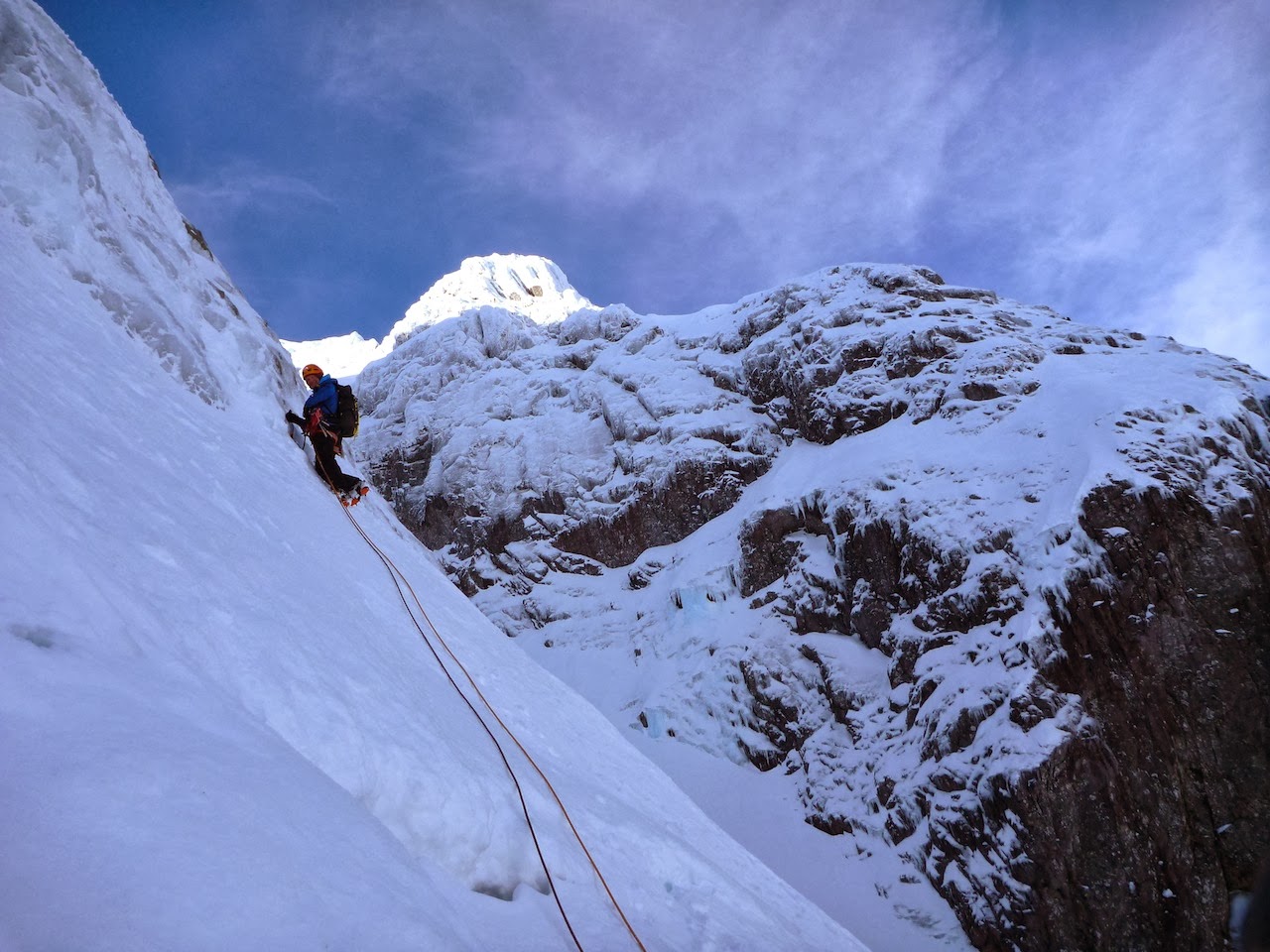 Starting up the first pitch 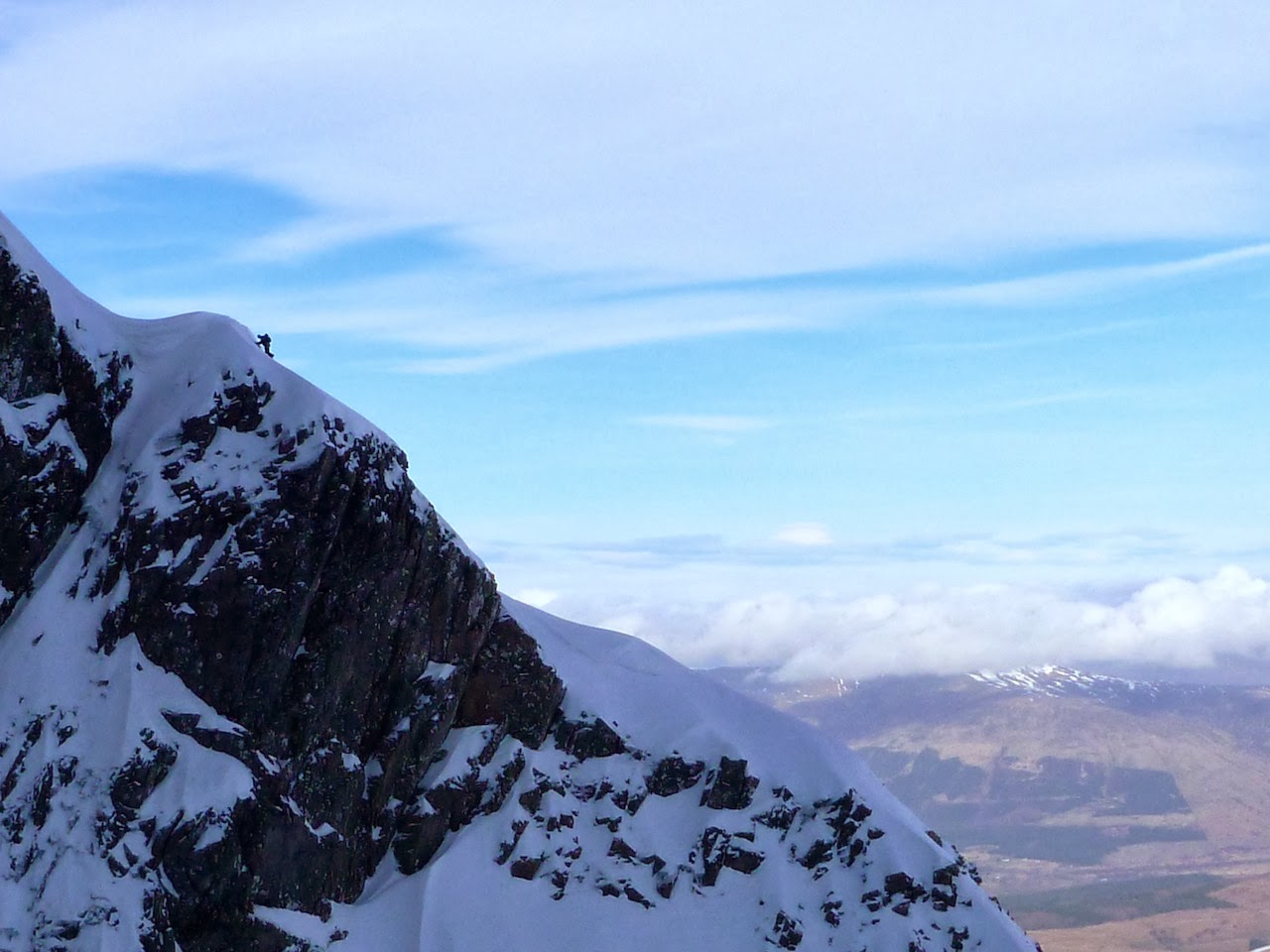 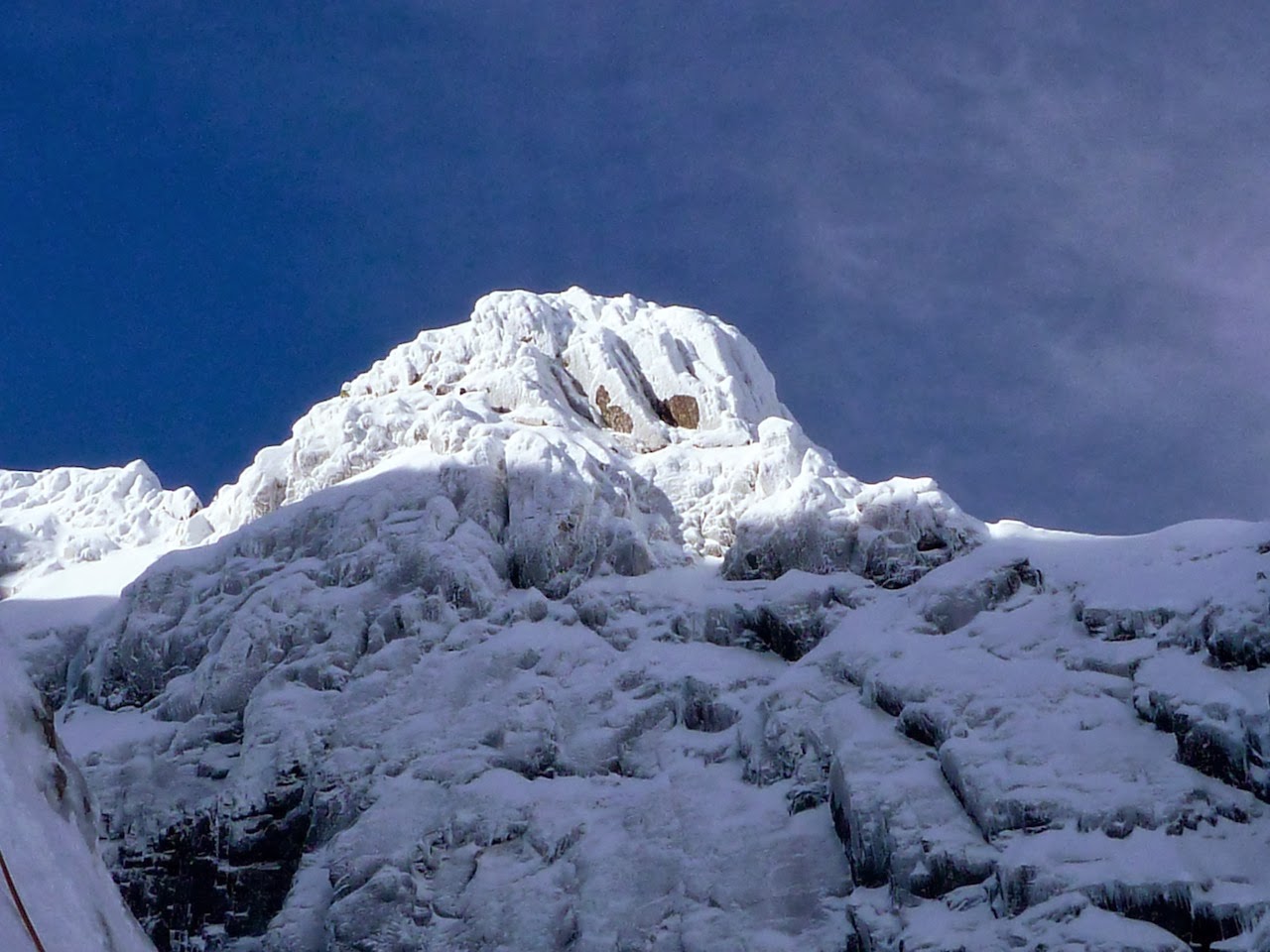 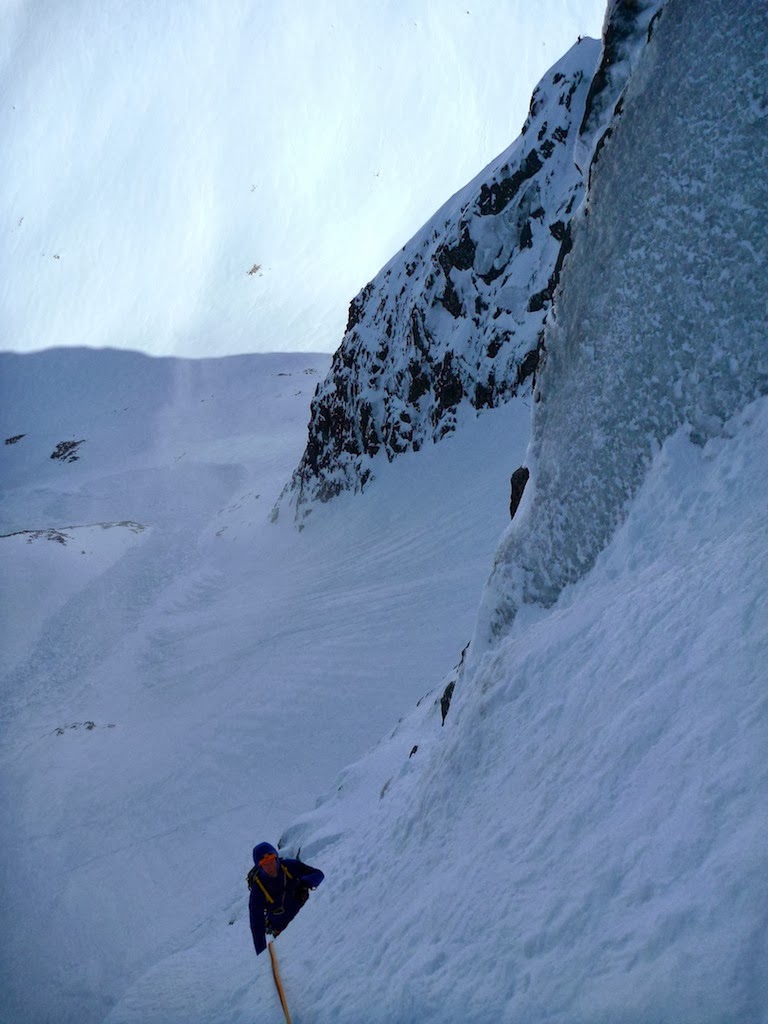 JJ at the top of pitch 2 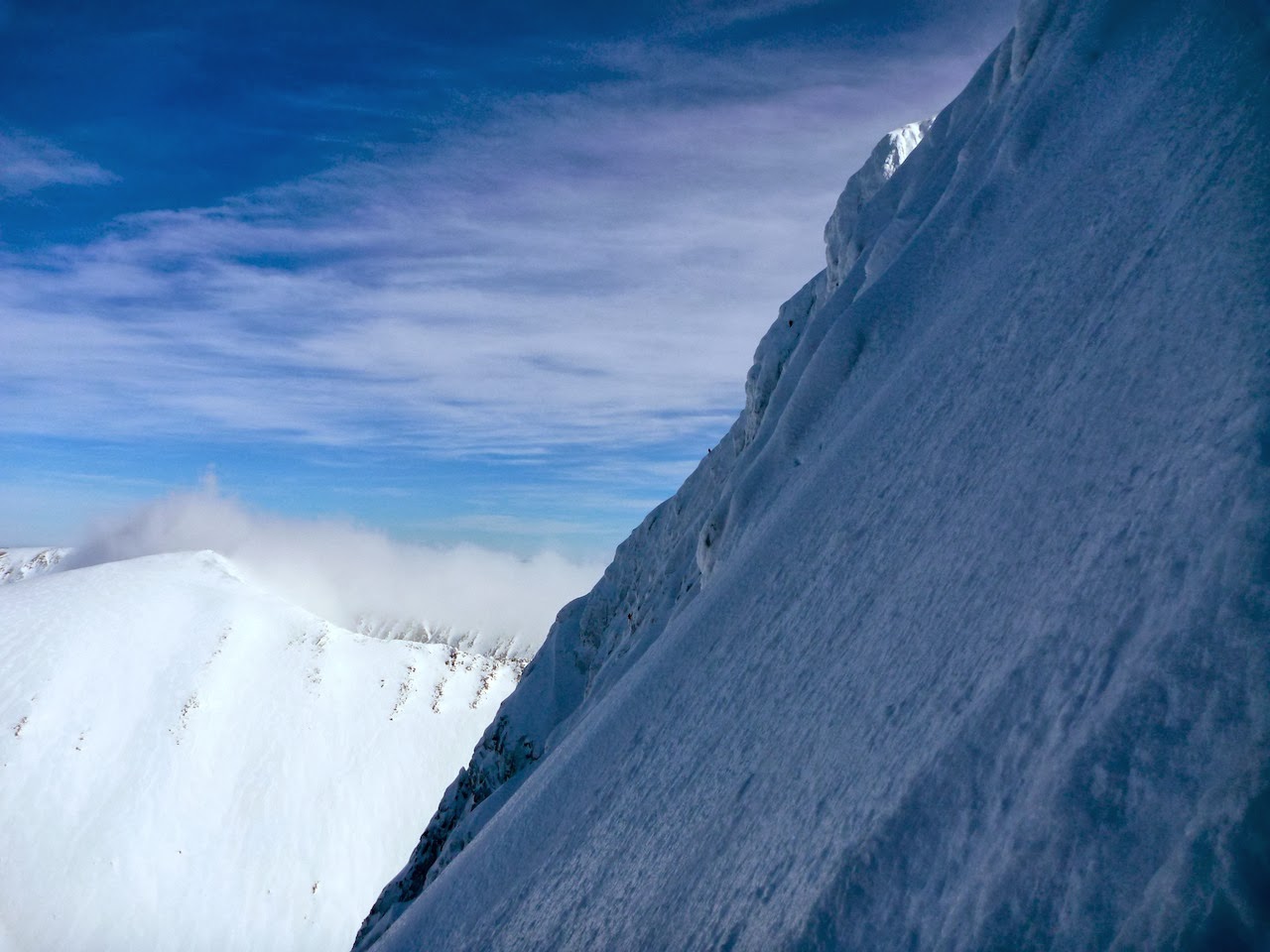 Adrift in a giant snowfield 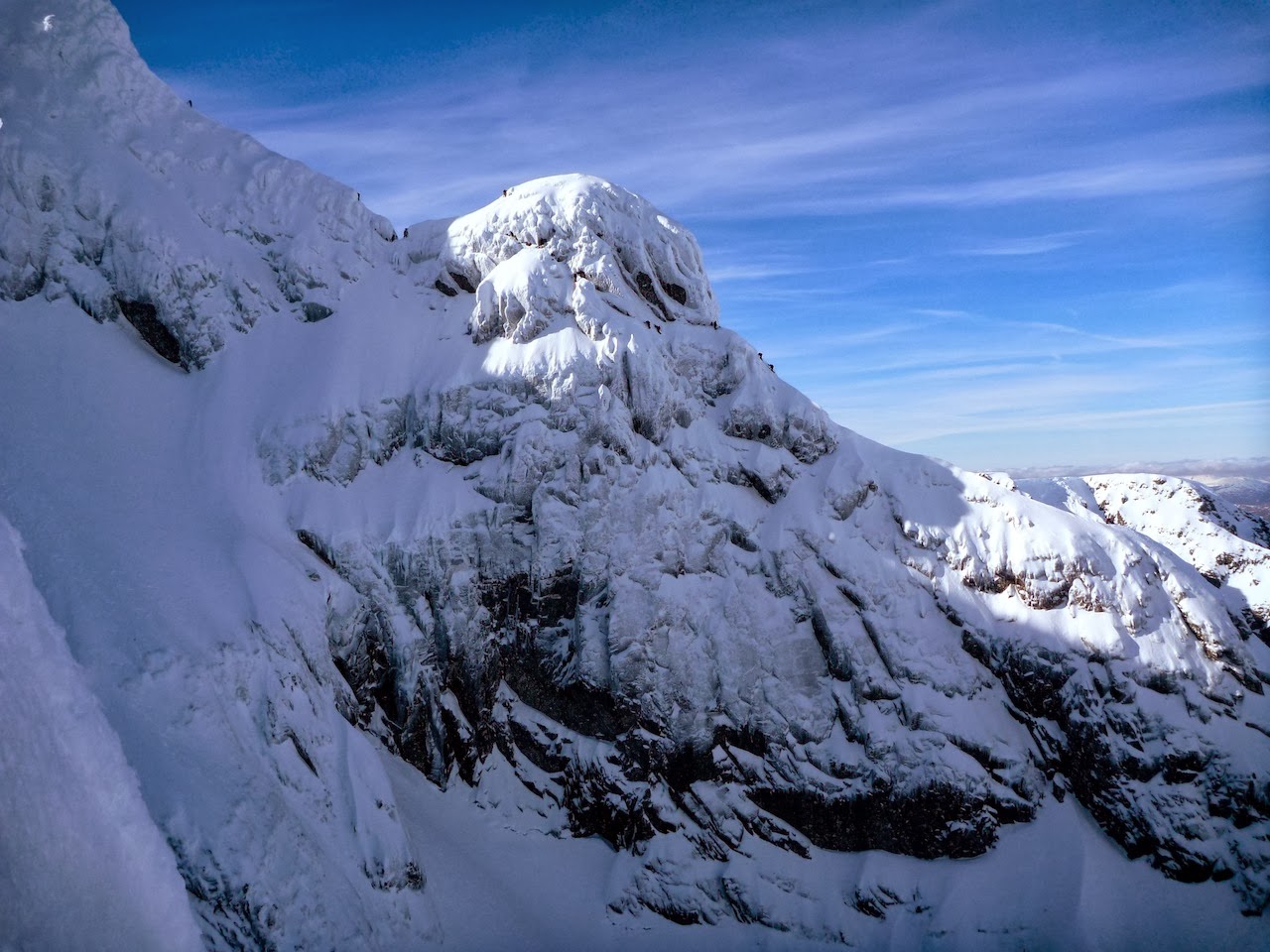 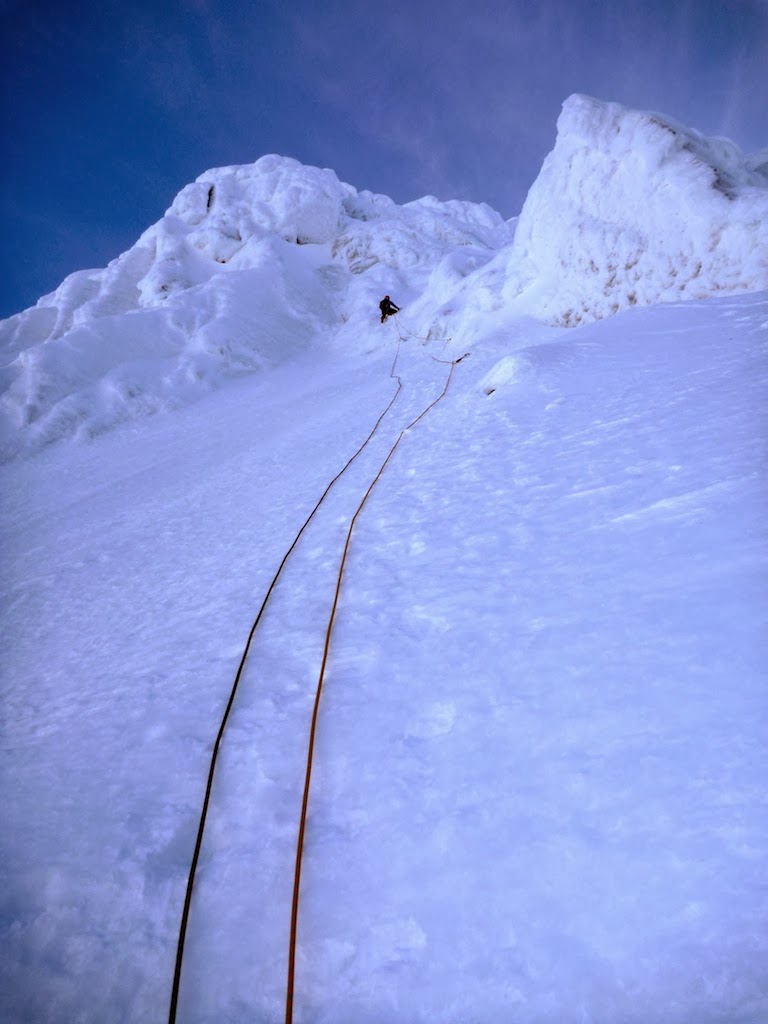 Jon heading out of the snowfield 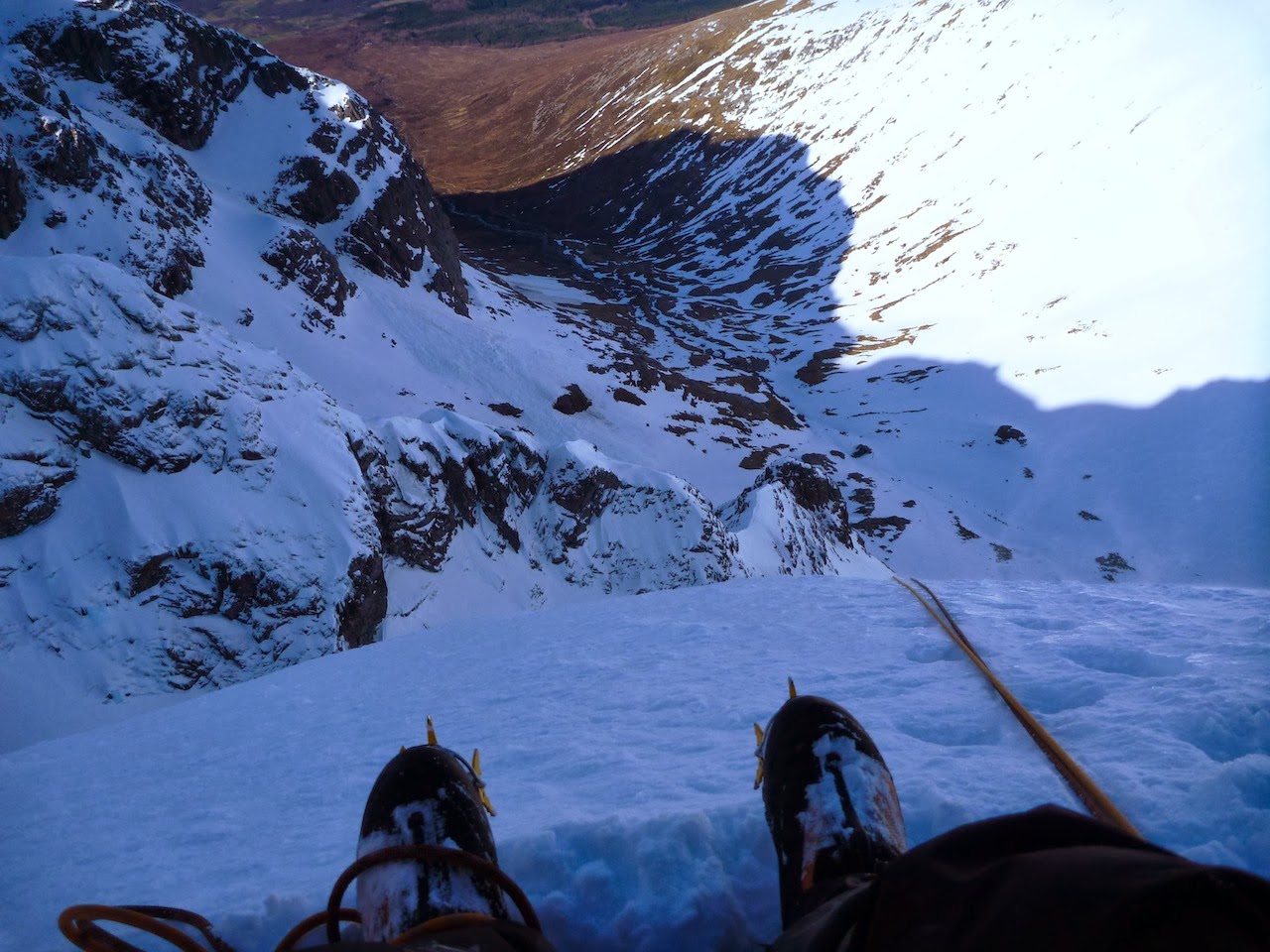 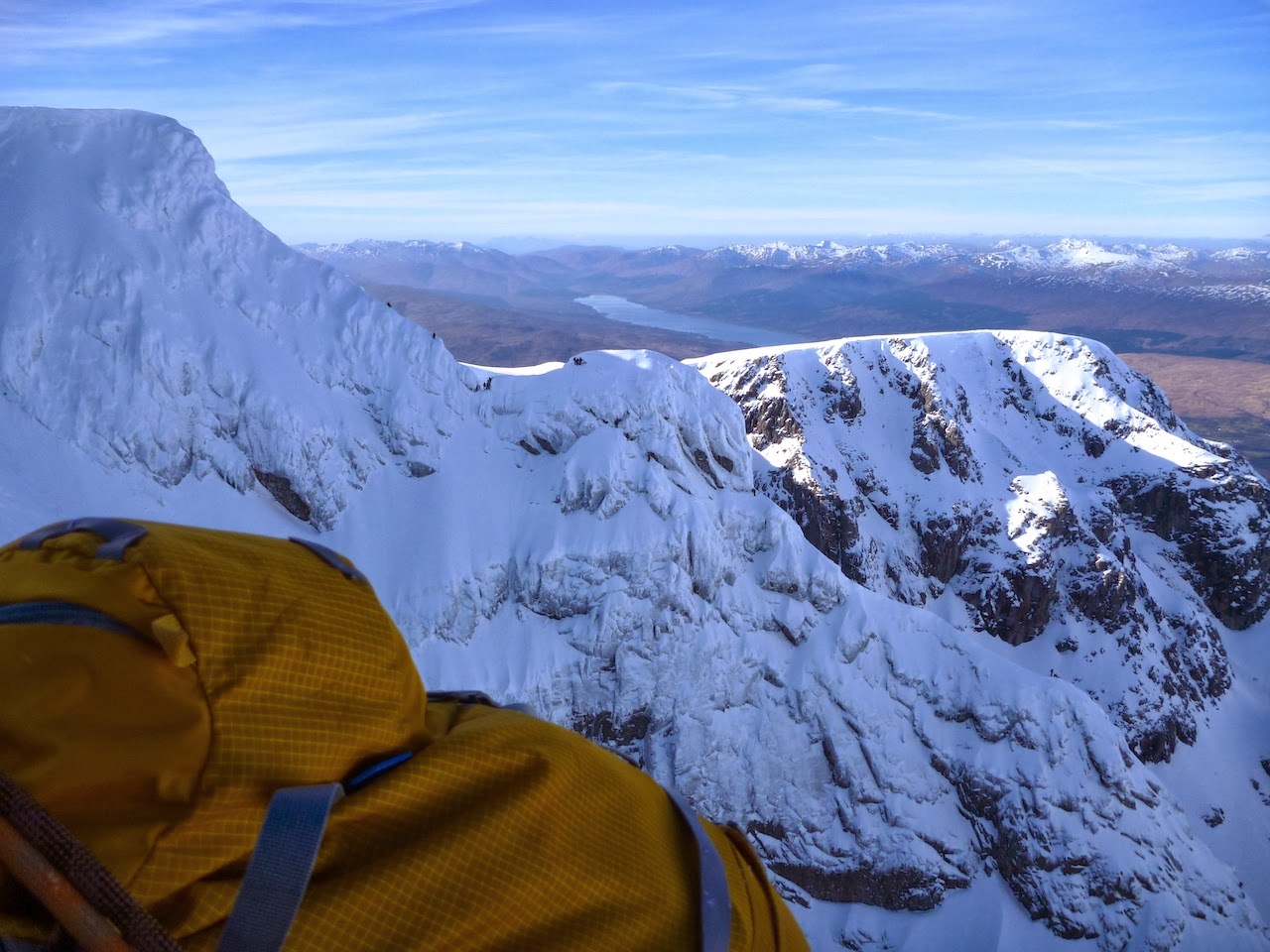 Bag with a view 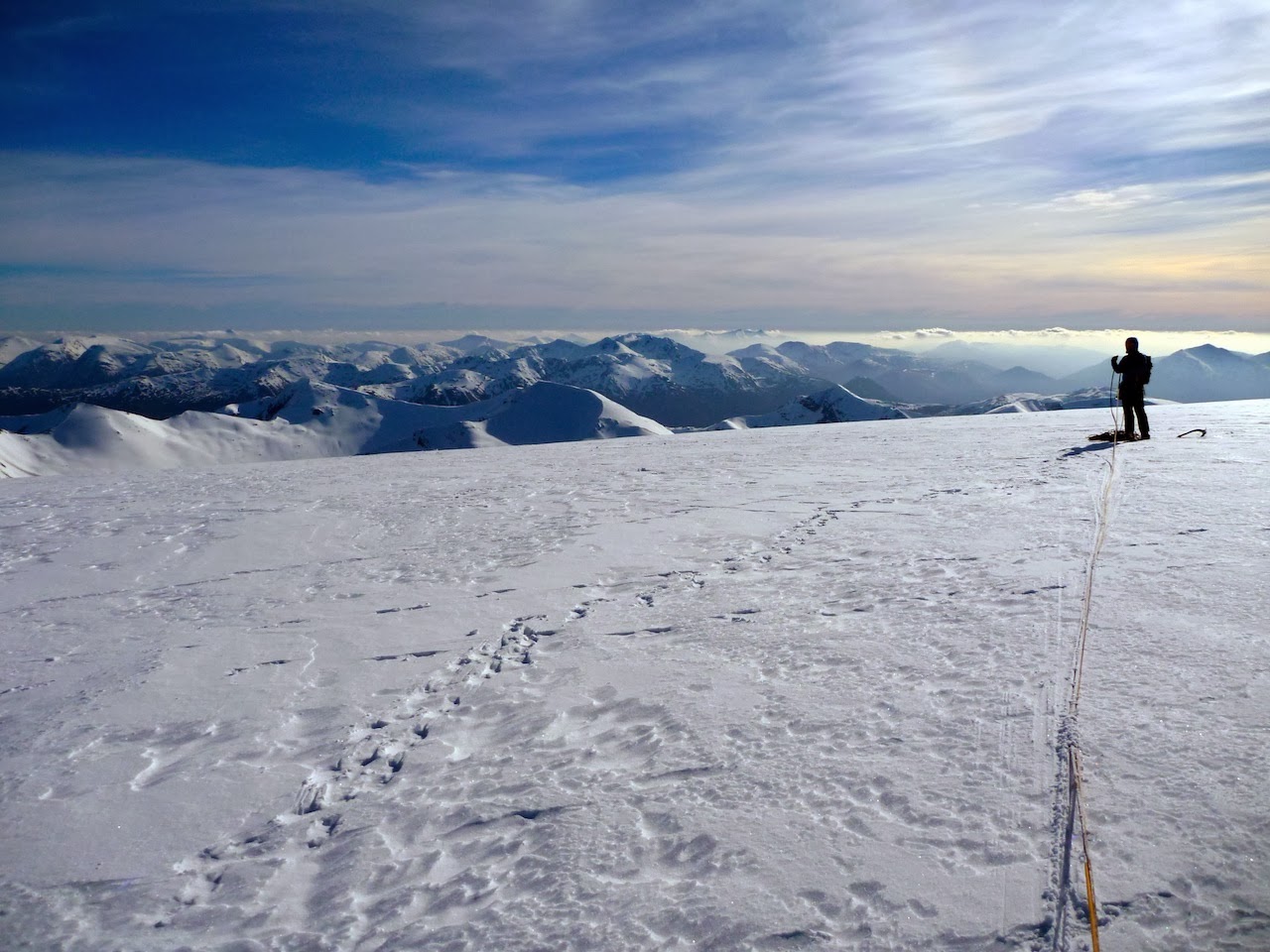 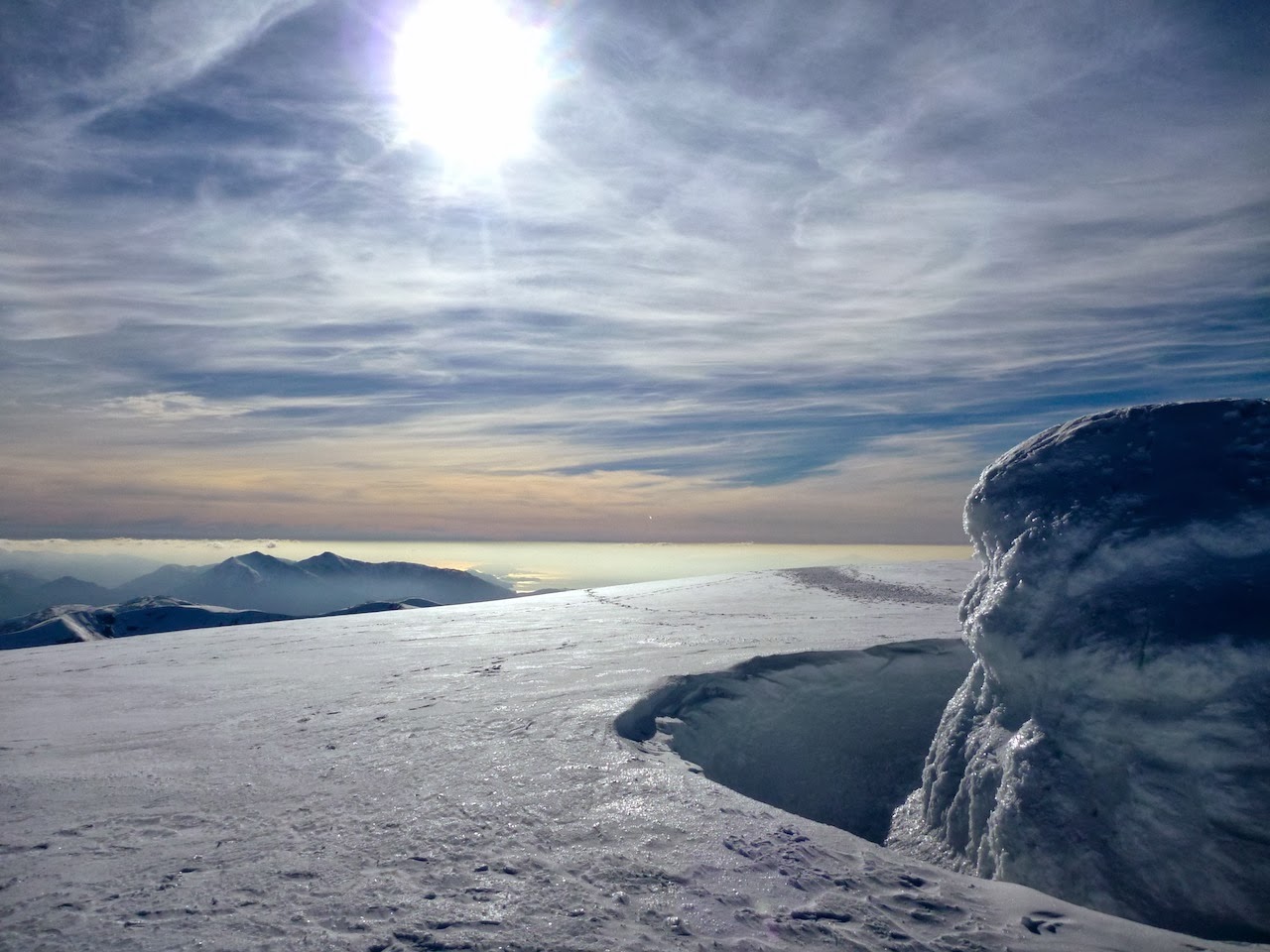 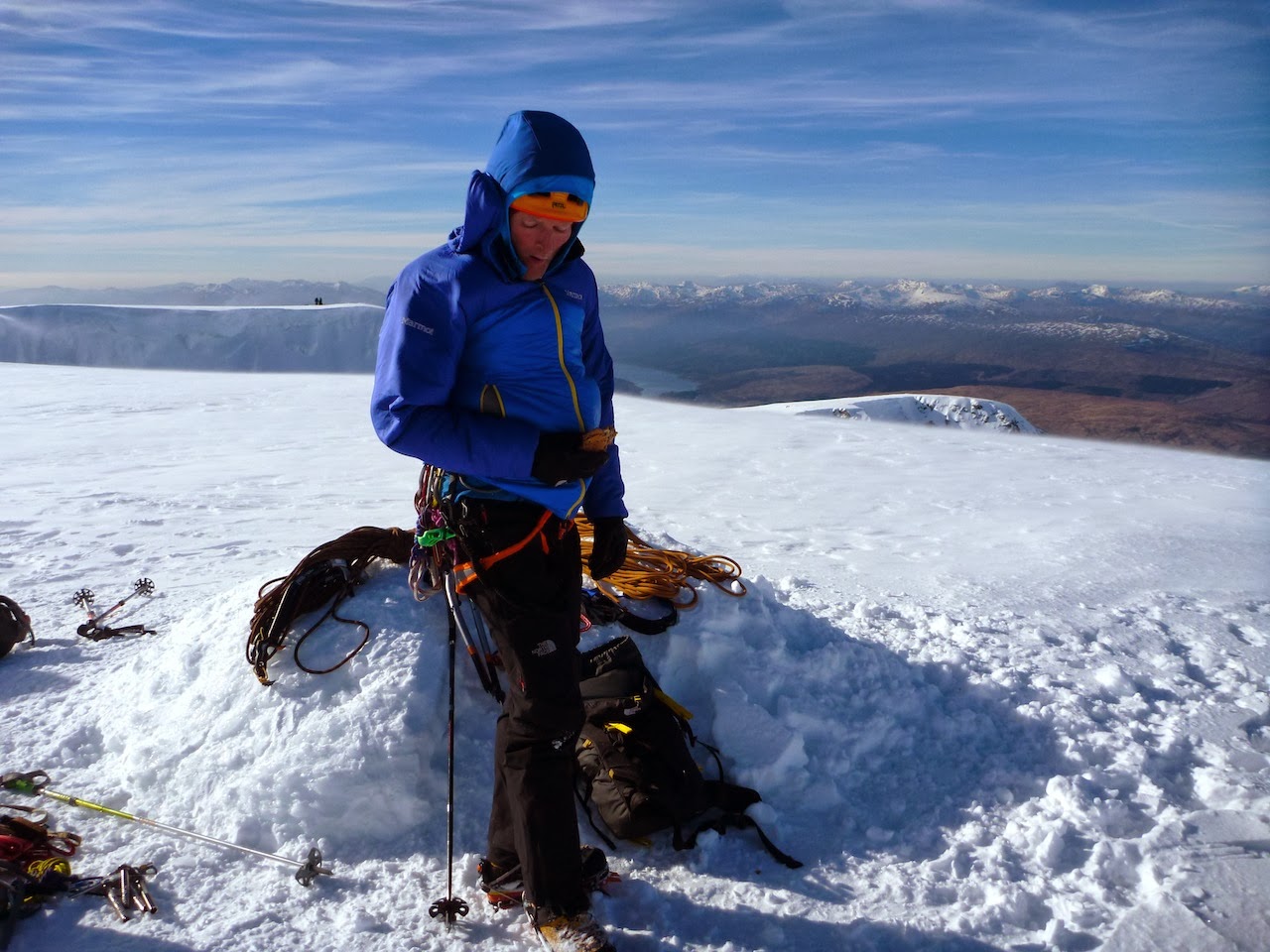 Under this mound lies the summit trig pillar 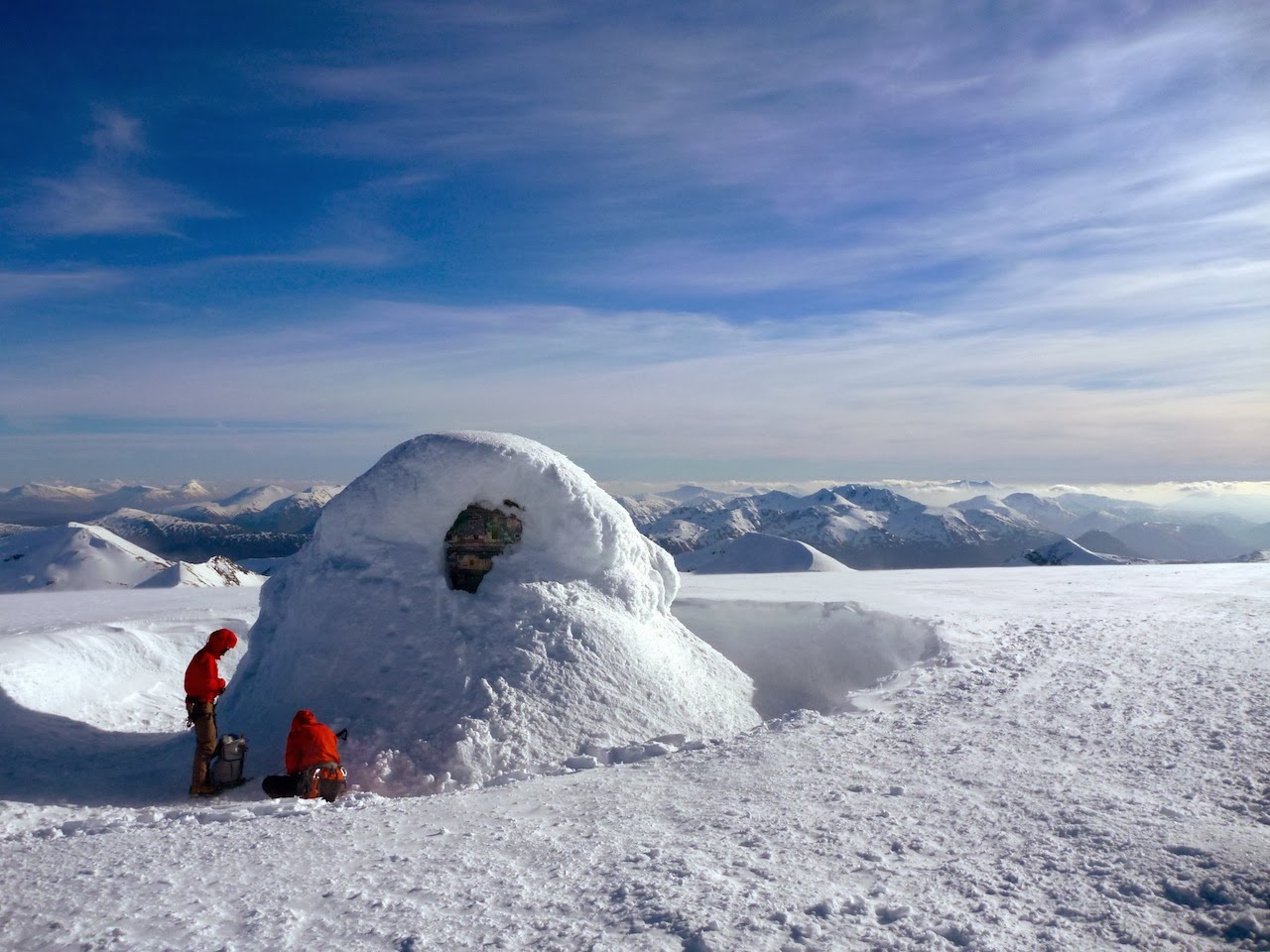 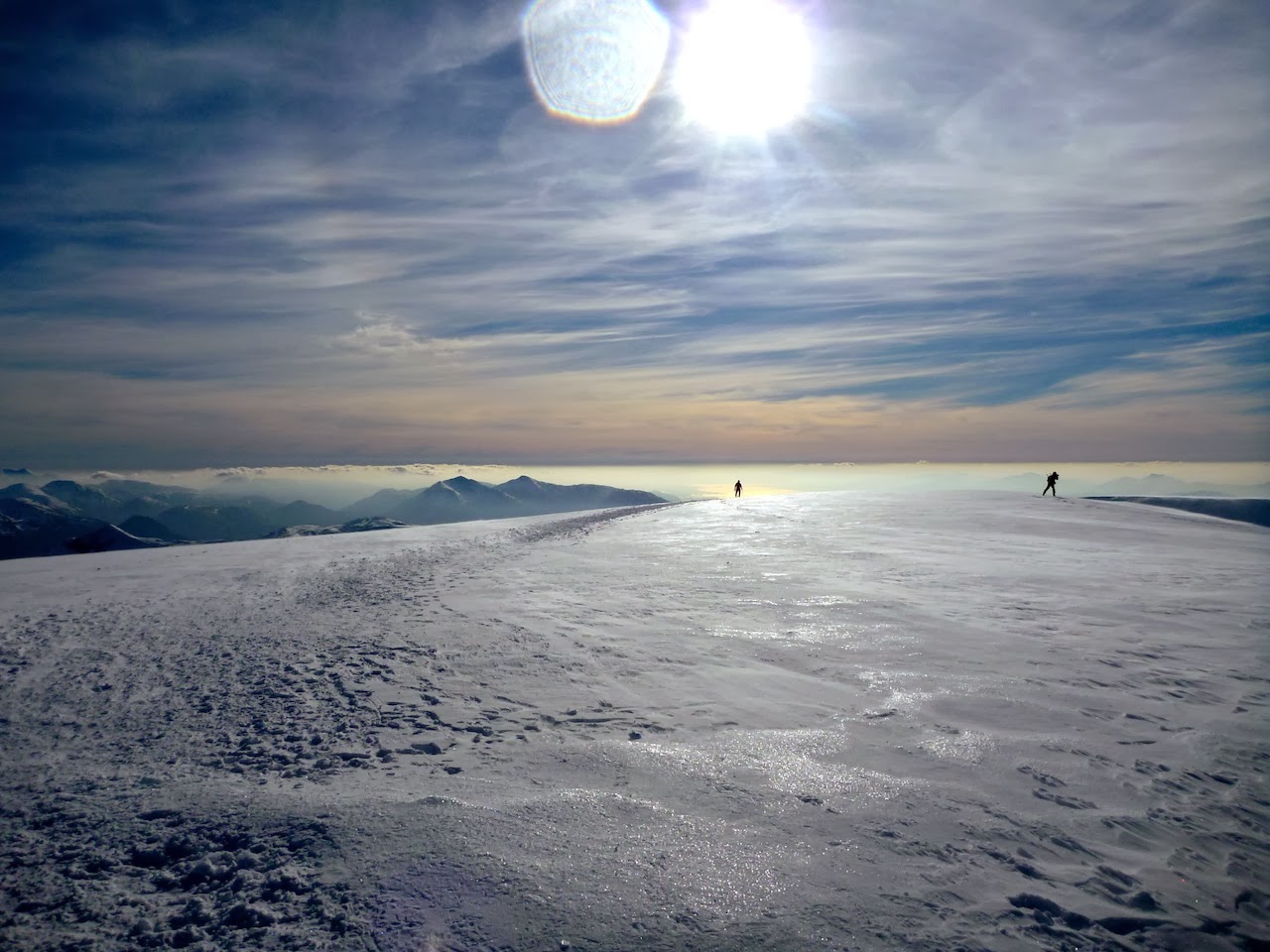 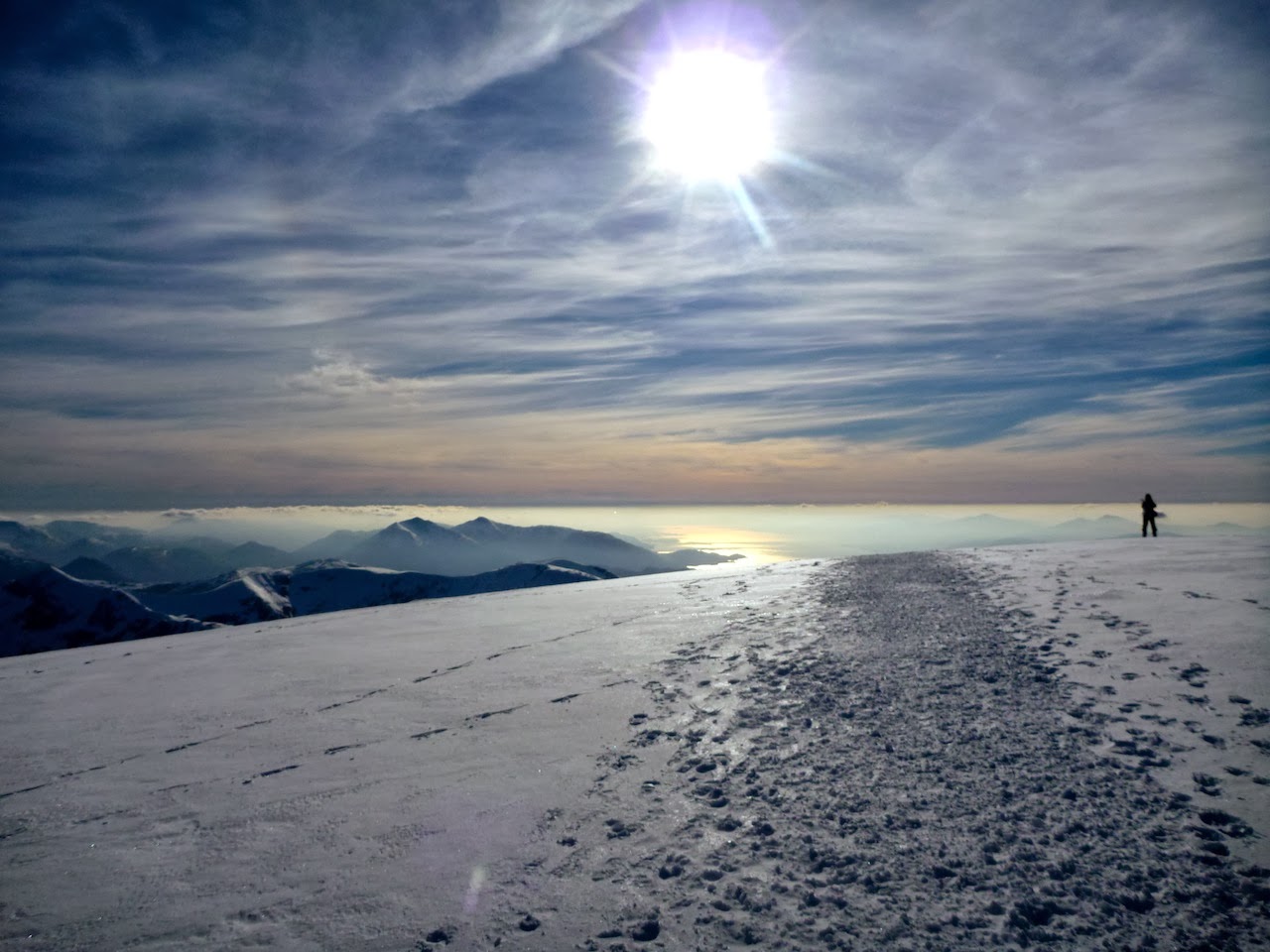 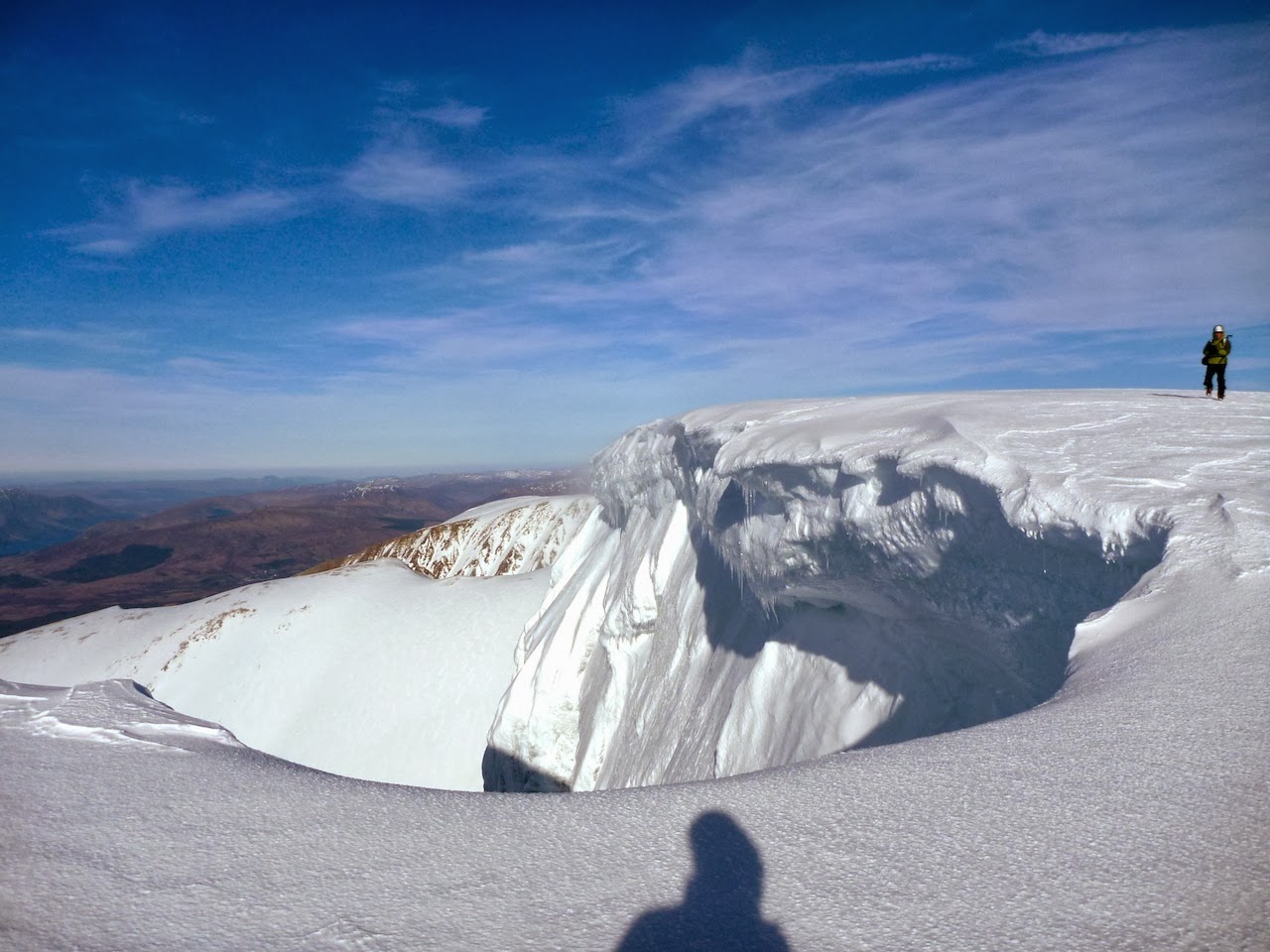 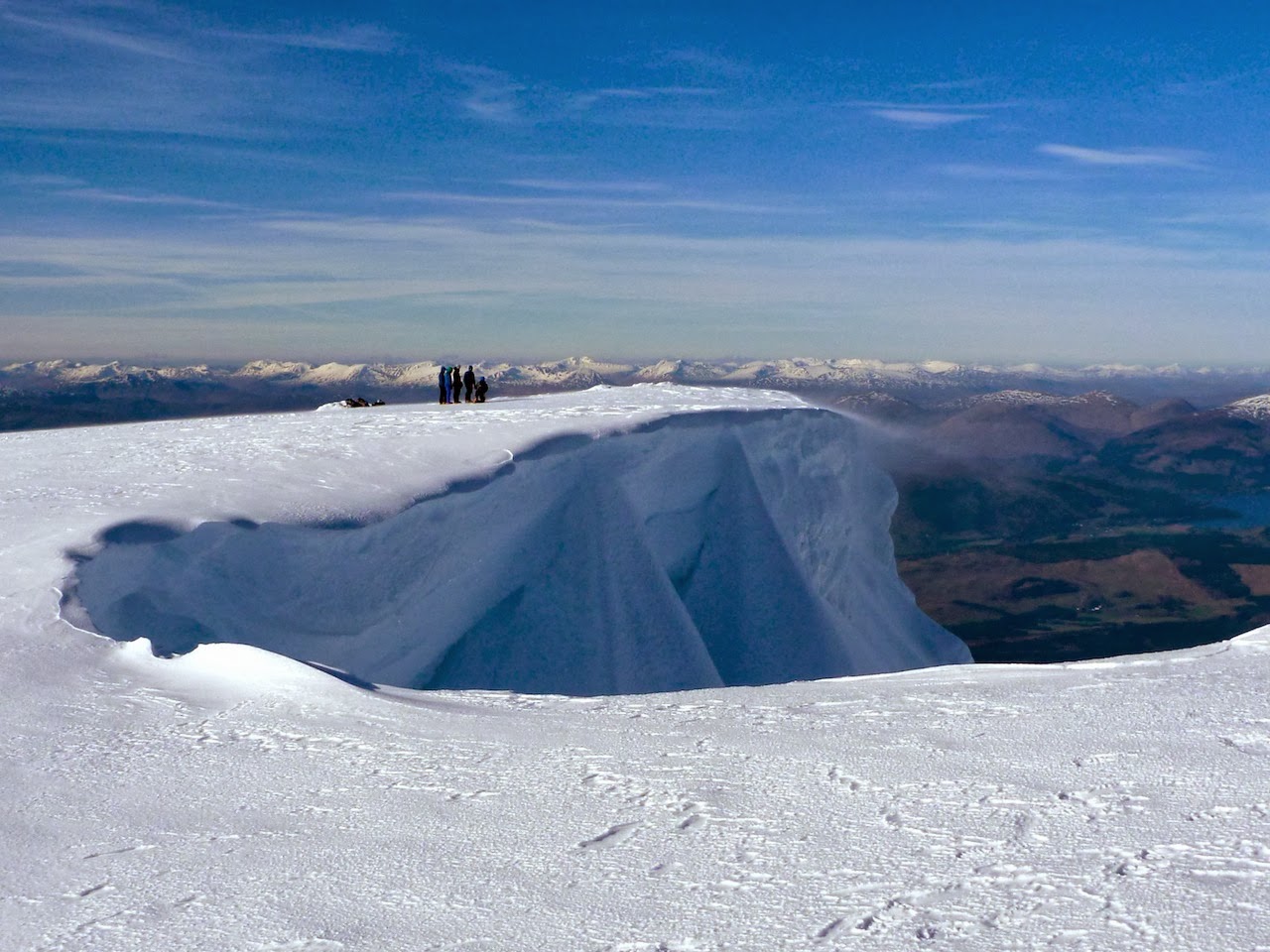 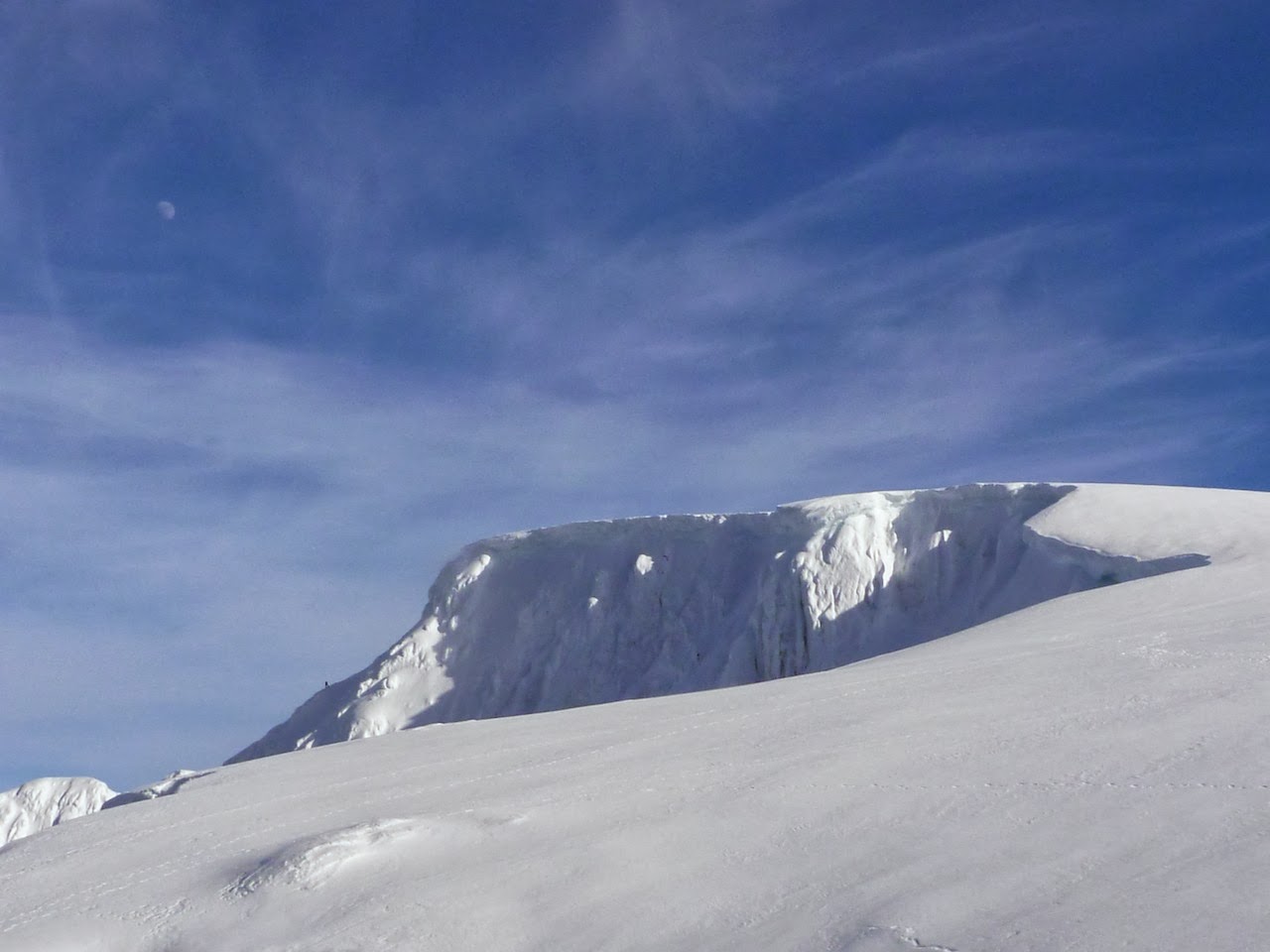 Monster mega cornice between No.2 and Raeburns Easy 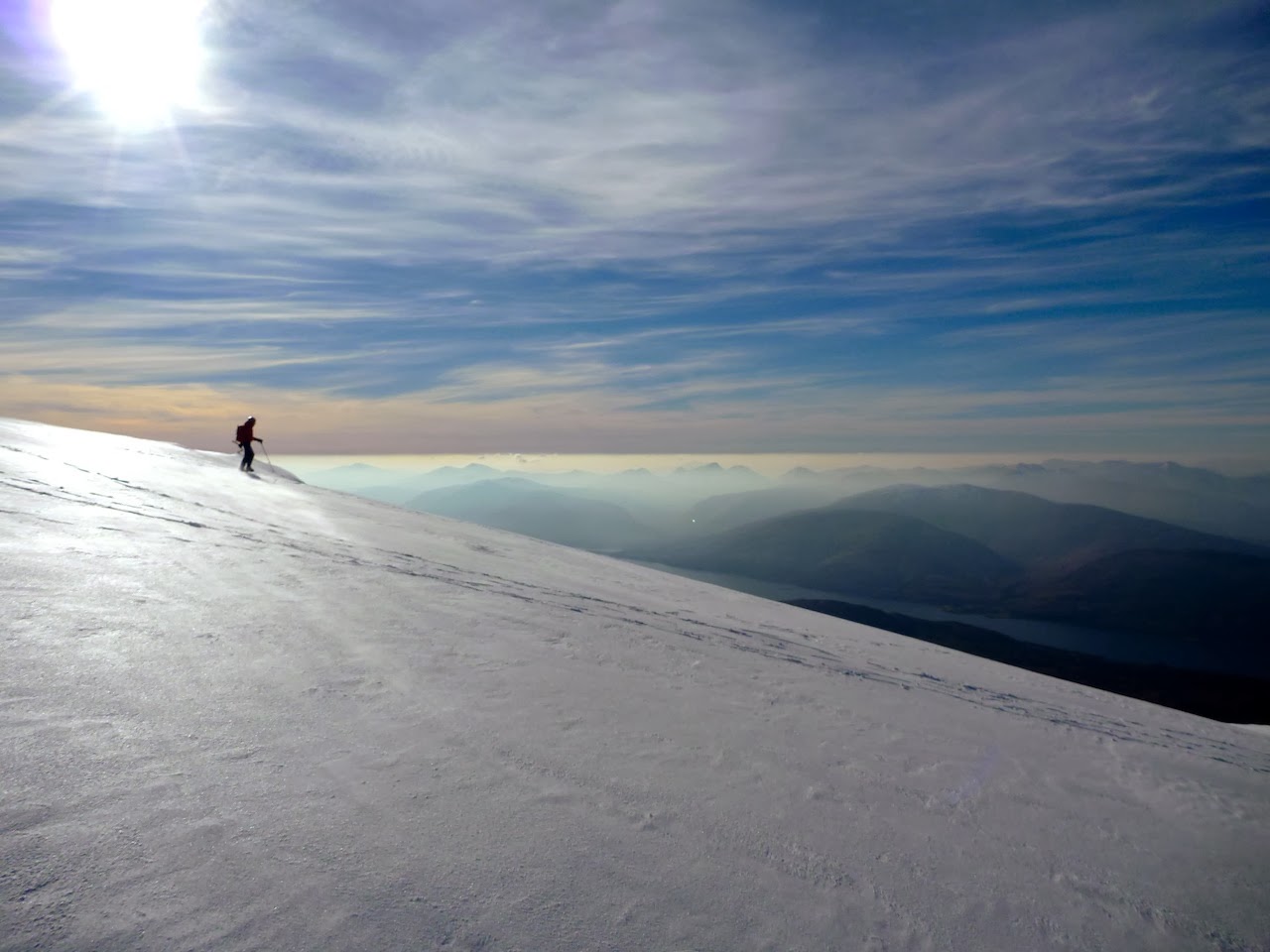 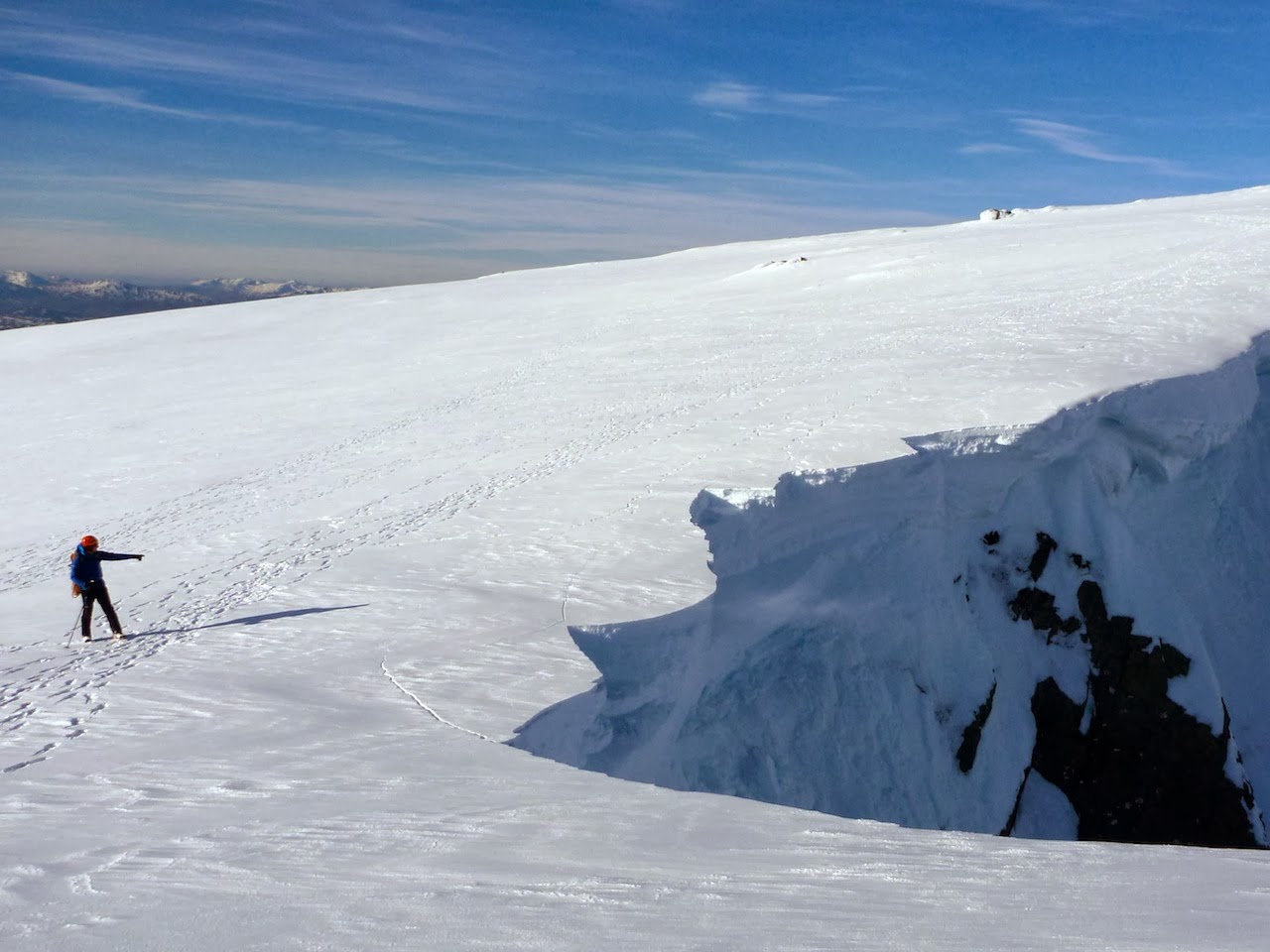 No. 4 after todays cornice collapse. Spot the footprints that just end AND the cracks
Posted by Alan at 22:03