Last day out with Claire today and she had Golden Oldy on her hit list. So she, Lou and I got the early gondola on a fine looking day. Neither the day, nor the route, disappointed today. 4 of the students I work with had the same idea and followed in behind us as I began the arduous trail break through deep set snow- no evidence of the 2 parties who did the route yesterday at all other than 6 feet of vague tracks high on the ridge. After over an hour of sweaty work Ewan took over and Mark, Brodie and Kate helped him stamp out a trail until we were below the route and kitting up. Then I brought out the secret weapon- what Lou lacks in size she makes up for in energy and she powered through the pow to the base of the route. There were now at least another 3 parties flogging up the glen behind us so once Mark and Ewan (carrying his skis) soloed off ahead we began a rapid progress up the route. We had a wee blustery snow shower as we began and a hint of one higher up but other than that we were all getting a bit pink from sun exposure, I kept to soft shells all day and the views across a deeply buried glen to the CMD and Ben Nevis (still enormous cornices around) were immense. Claire cruised up the ridge although one powdery knife edge where it was impossible to tell whether what you were standing on was solid or not caused a moments 'self talk'- well done.
We topped out in the sun to find only the top couple of inches of the summit cairn visible and more views this time to a huge drooping cornice on Aonach Beag. We passed a few ski tourers as we waded in a bit of a breeze across the plateau and yet more cornices were building over the east face (clean recent crown wall from an avalanche in Easy Gully too) before continuing to the bar far a well earned refreshment!
Top day, top company and a super keen pleasant person to show around some routes in Claire (nice weekend to chose too!).
Thanks to Lou for the pics and the trail breaking. 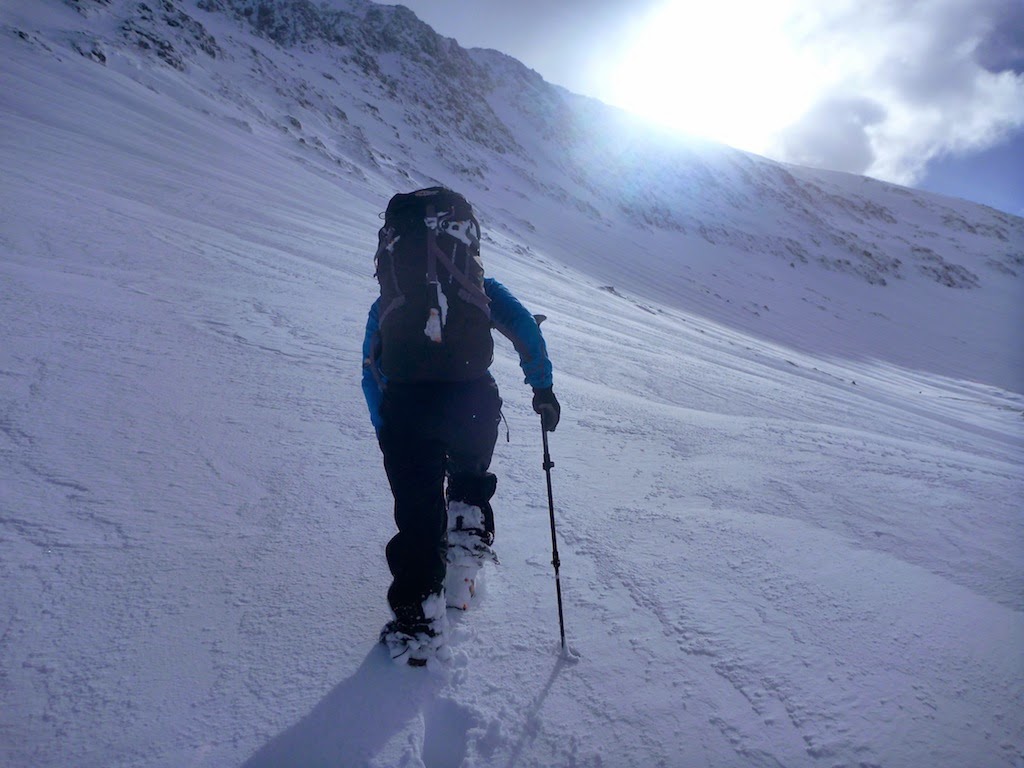 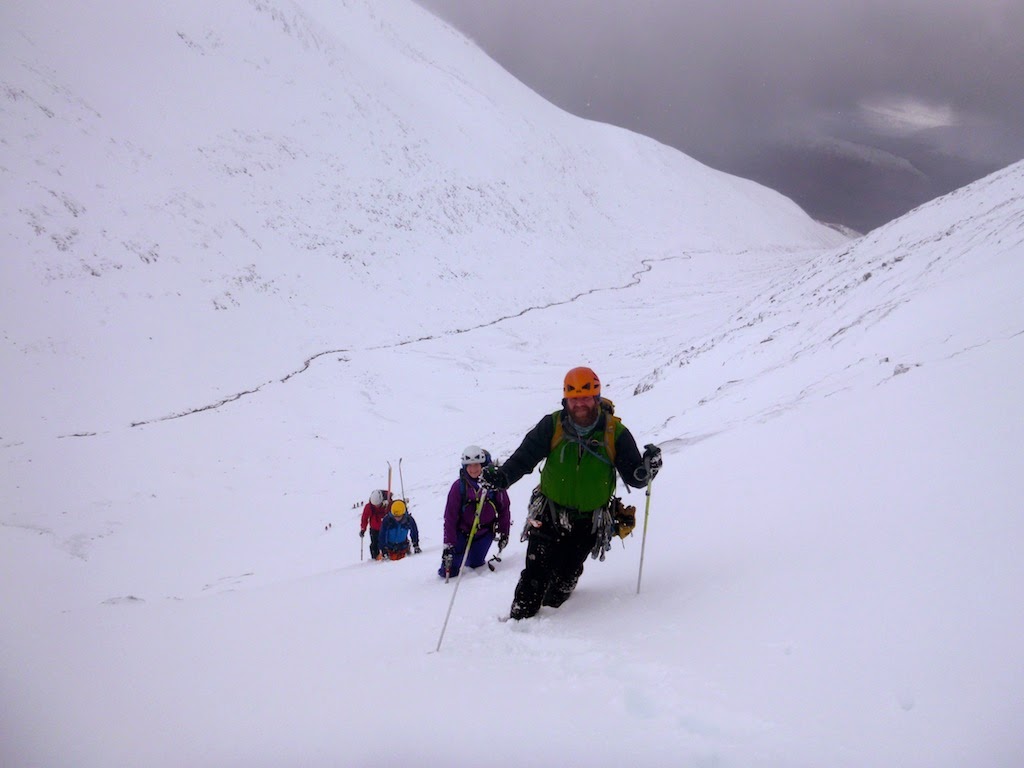 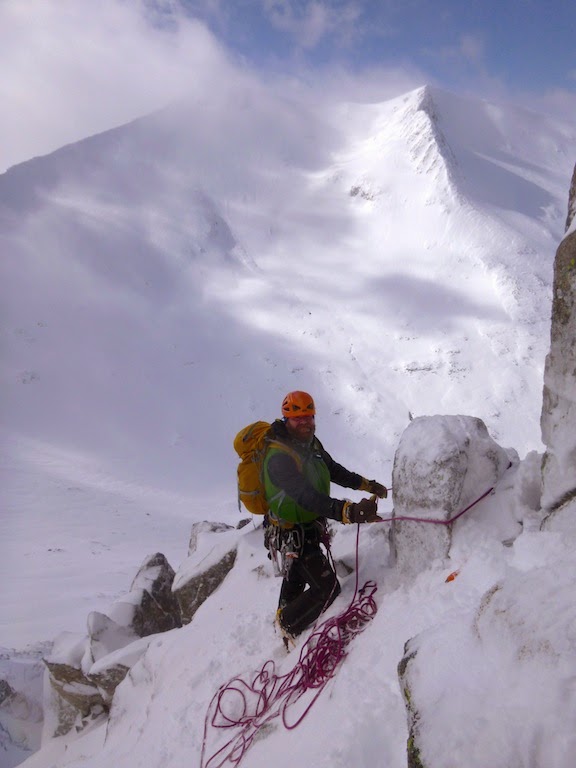 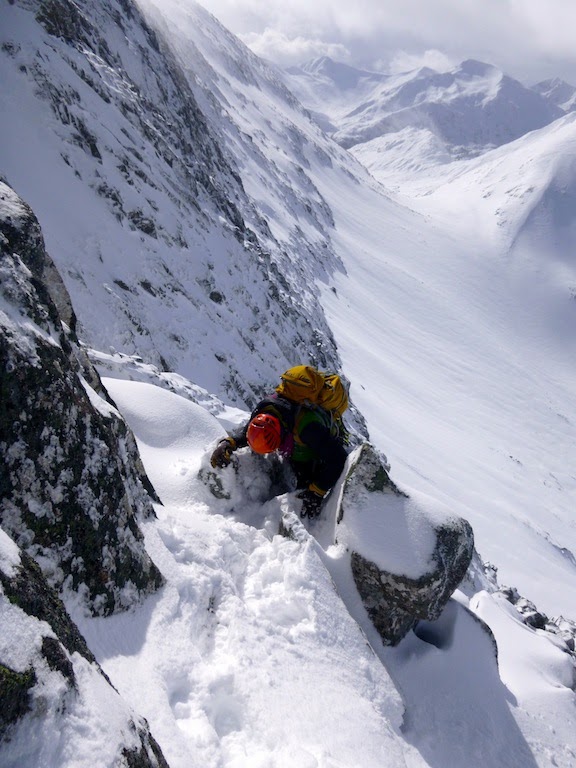 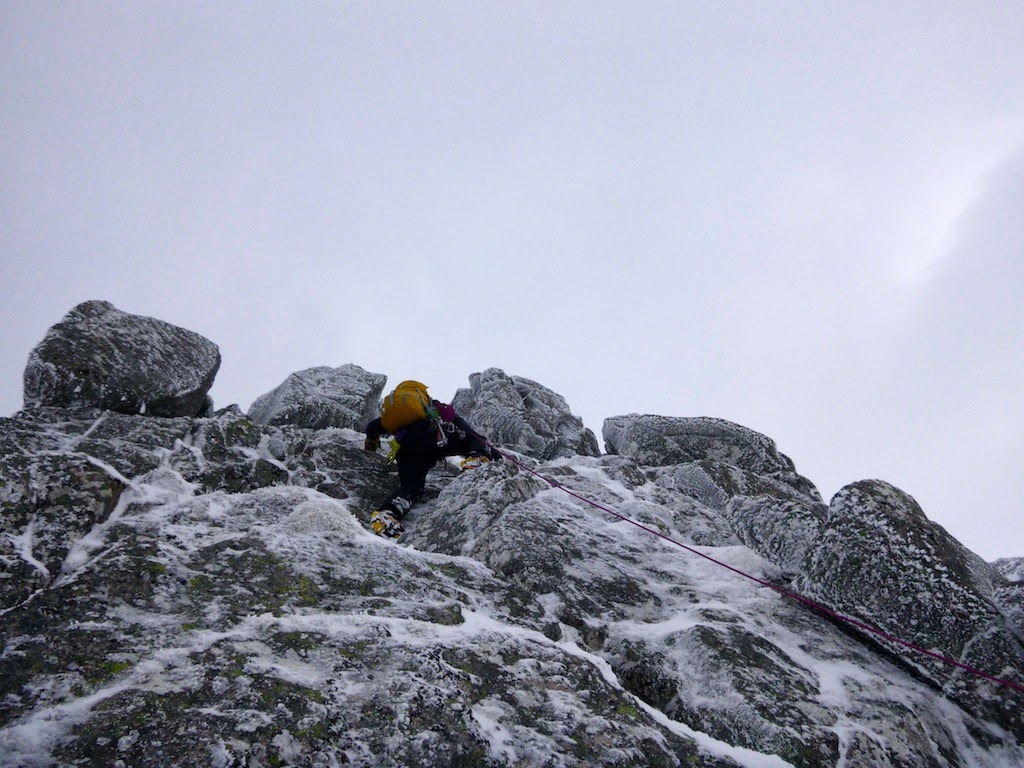 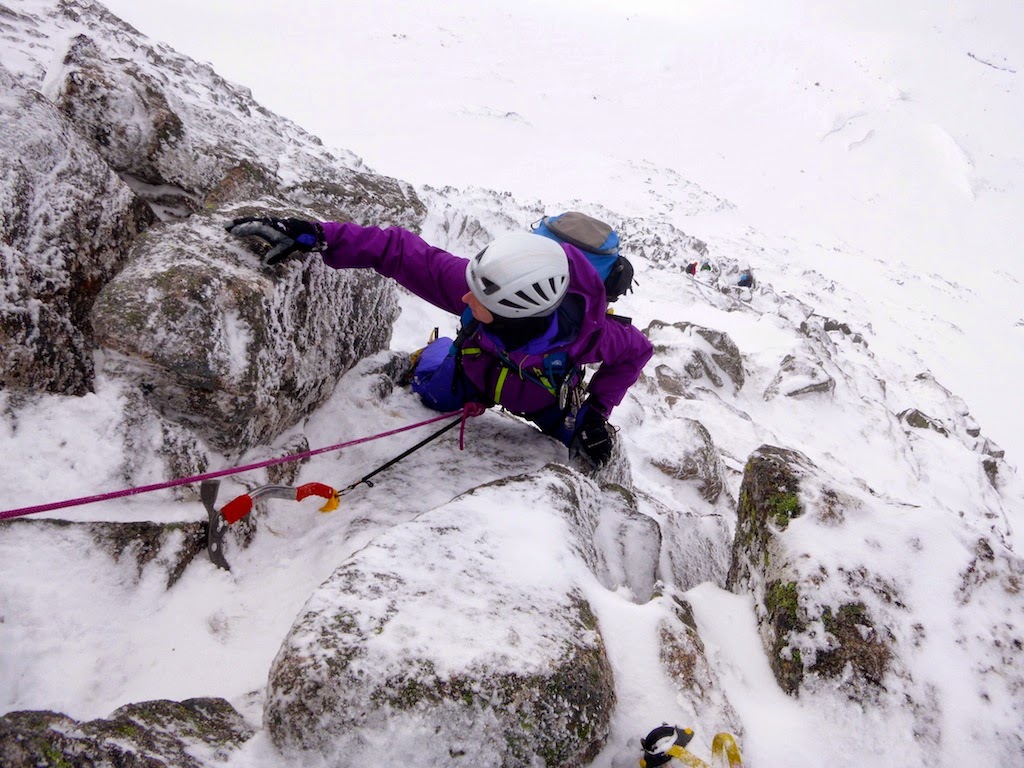 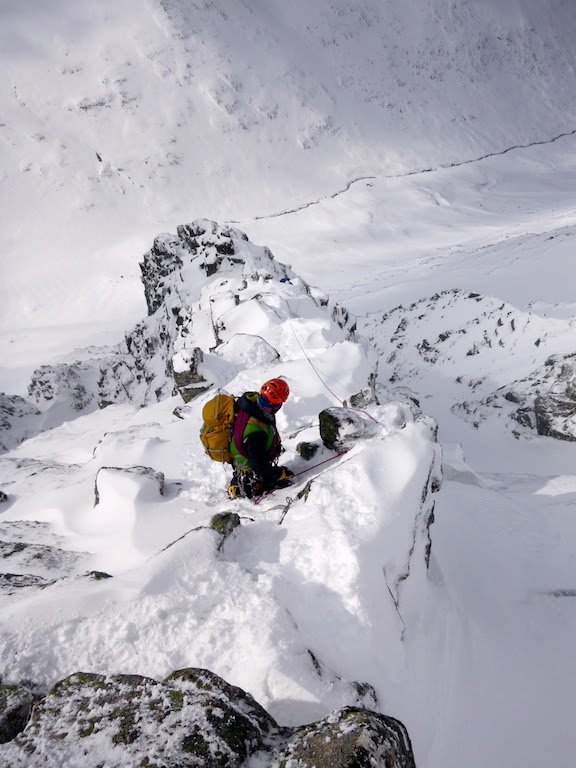 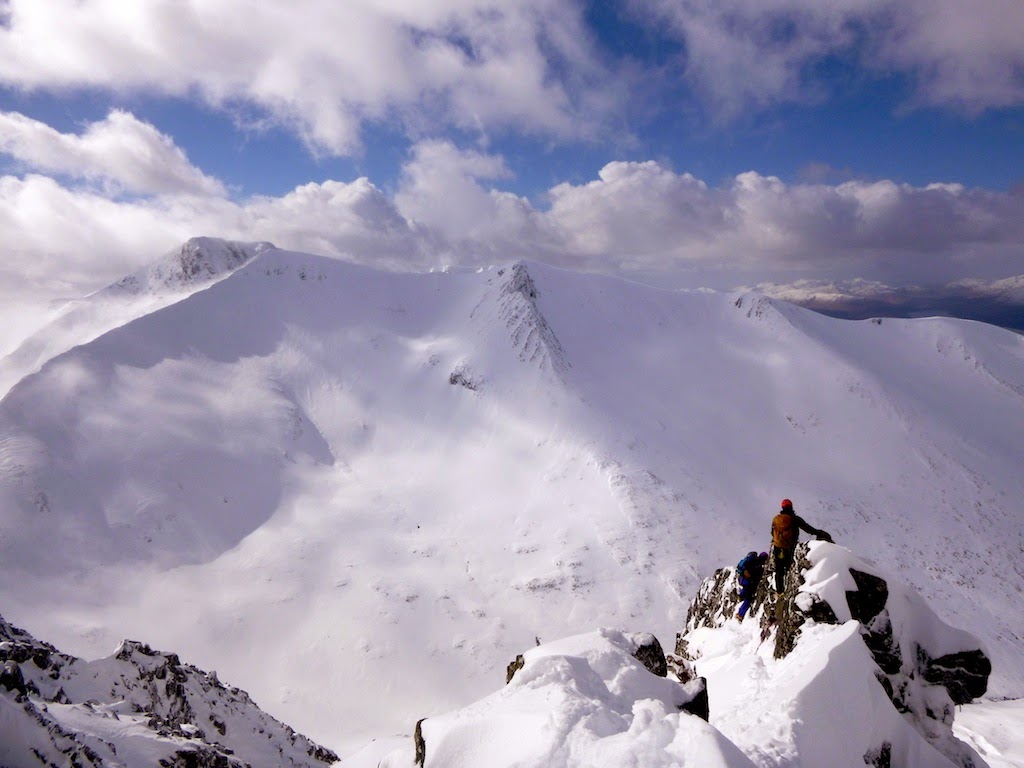 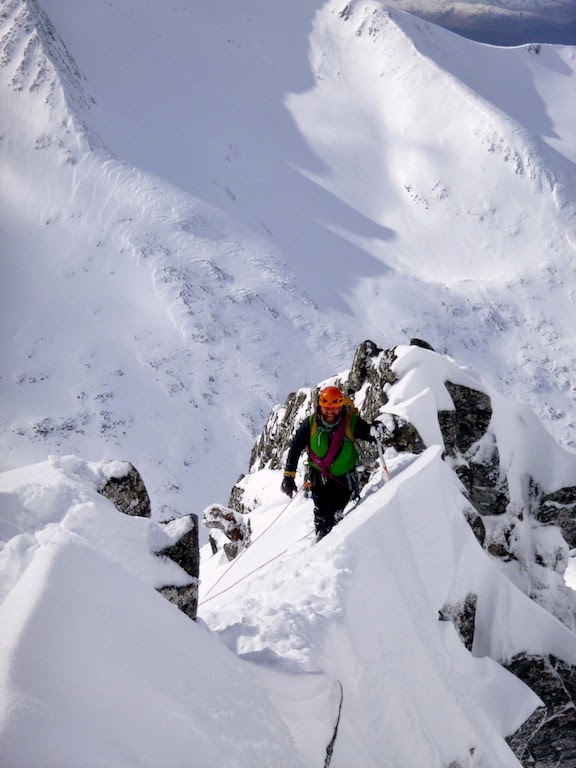 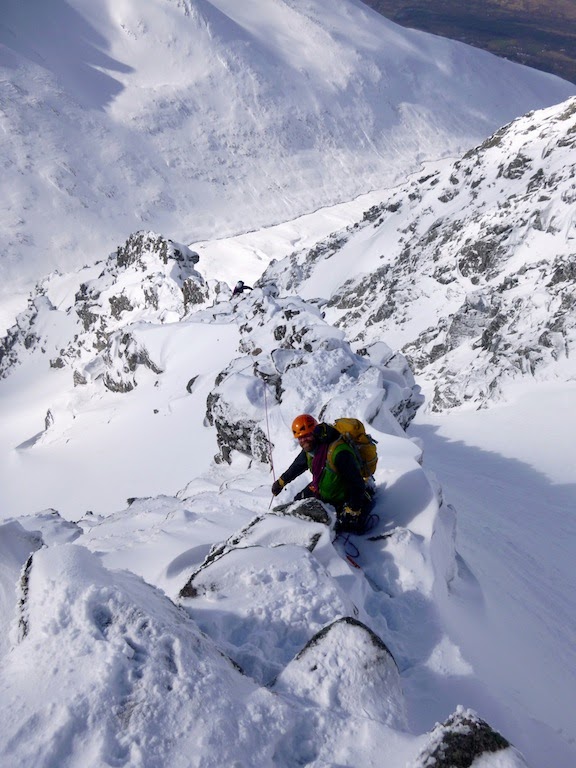 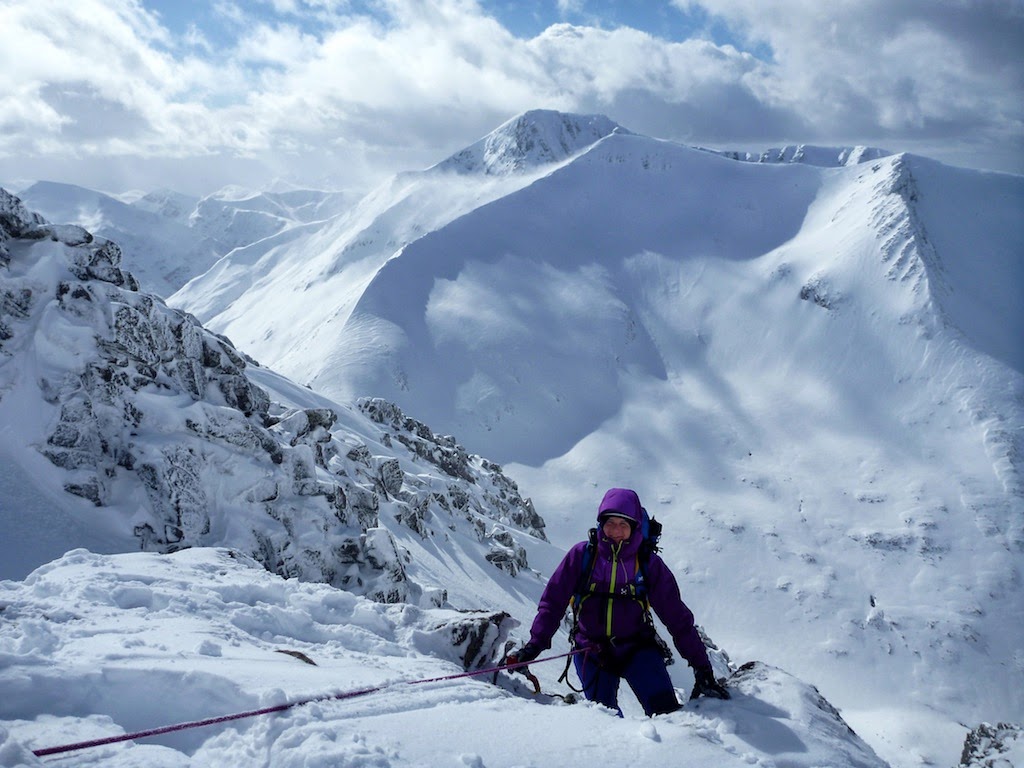 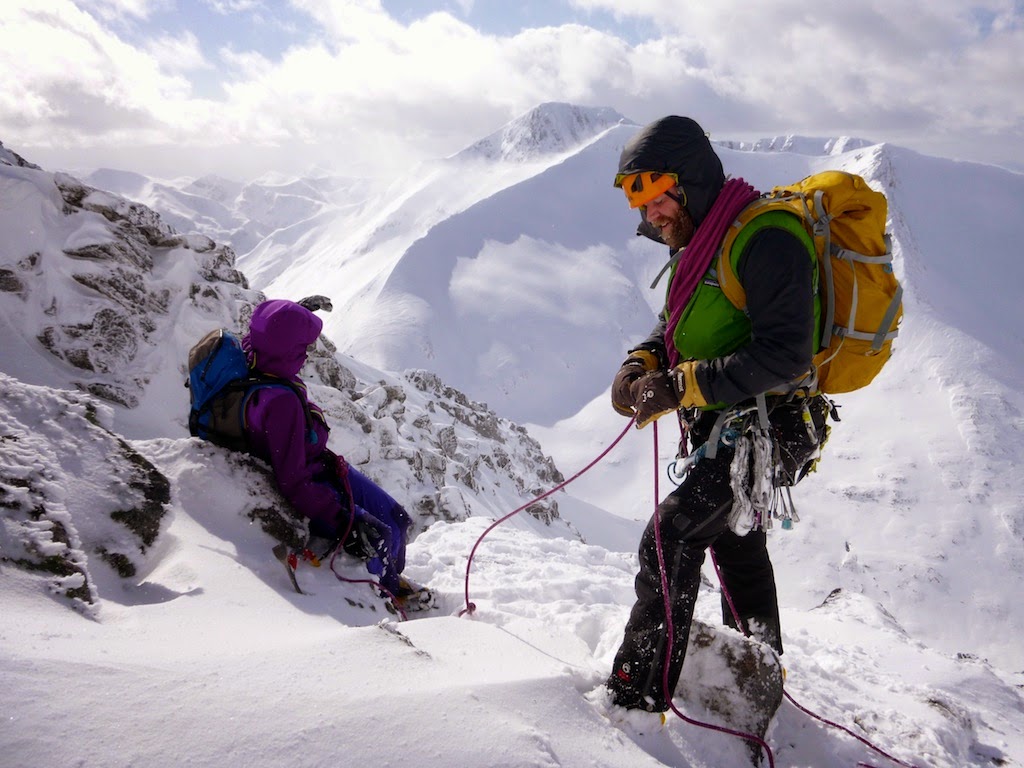 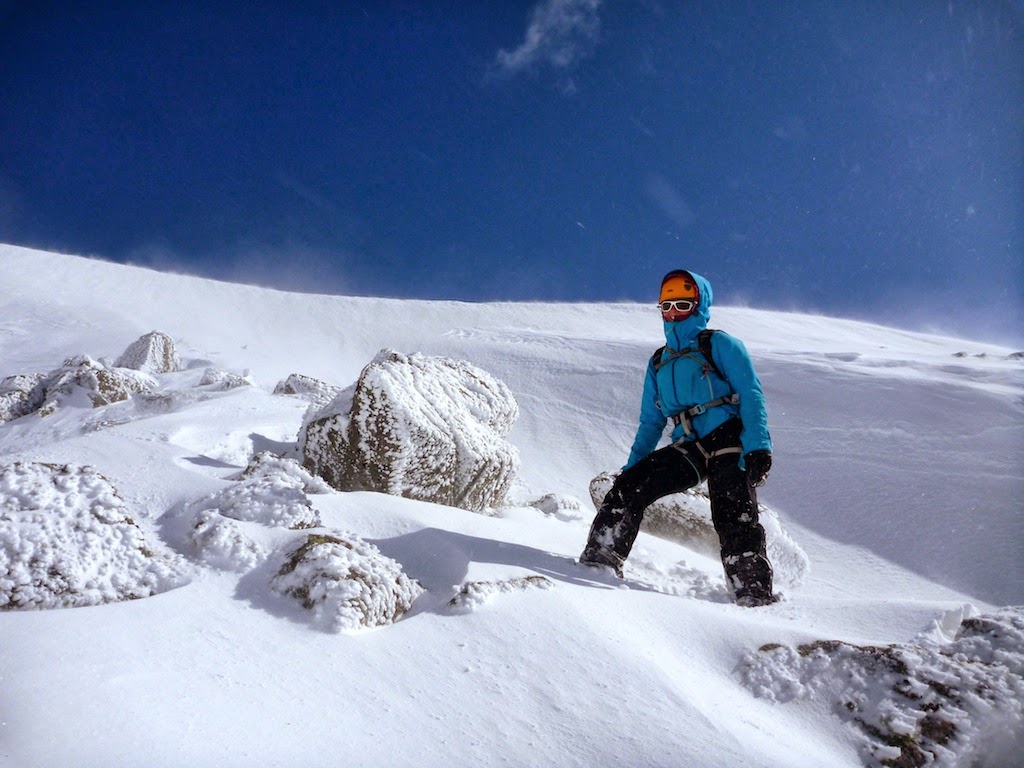 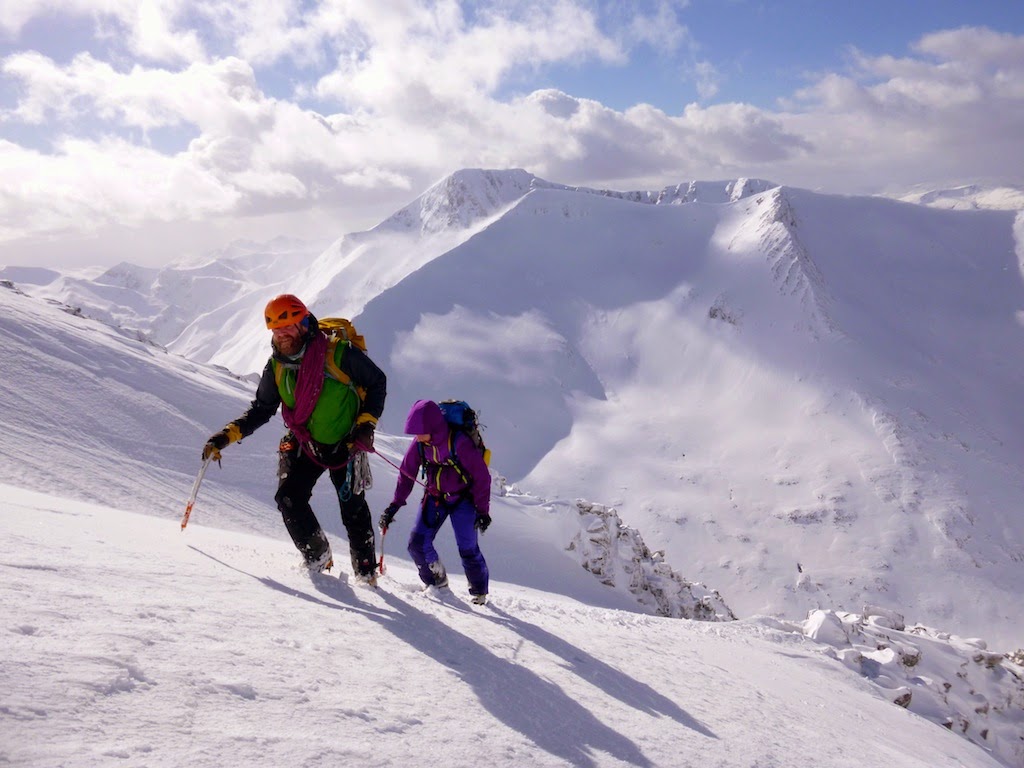 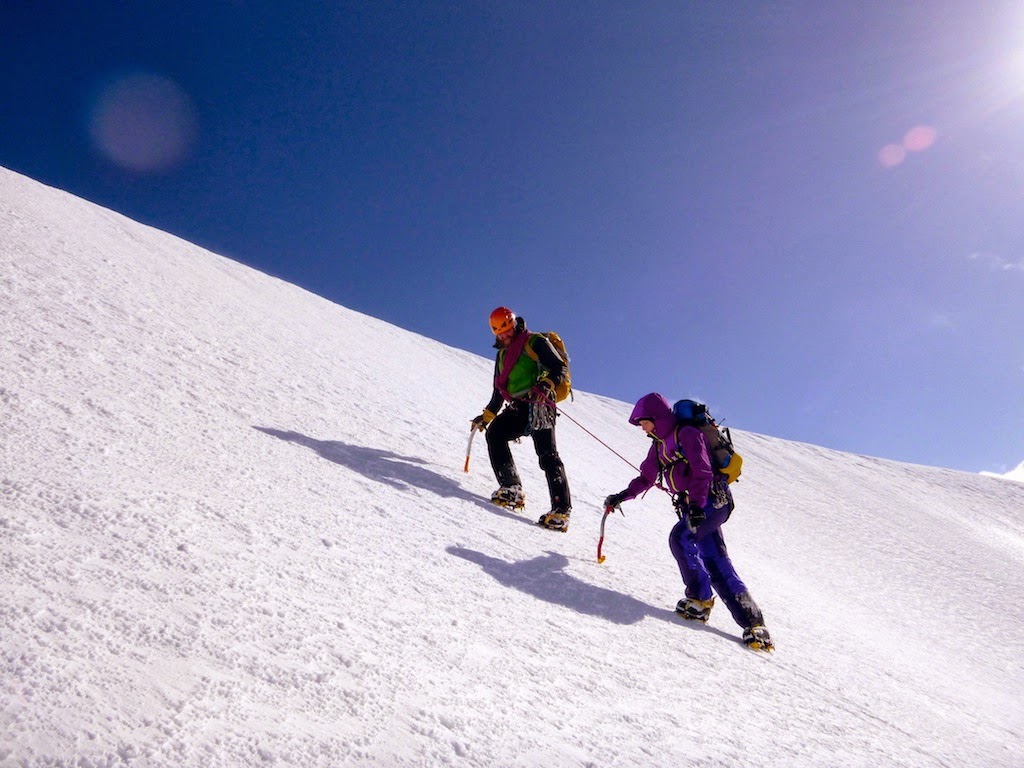 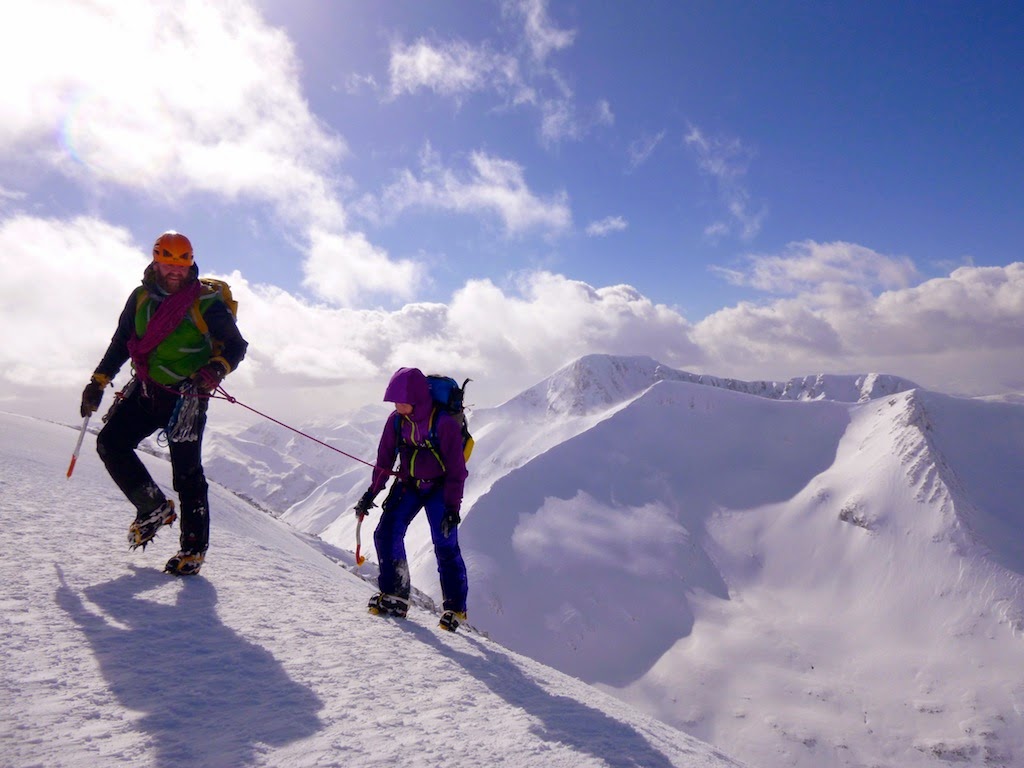 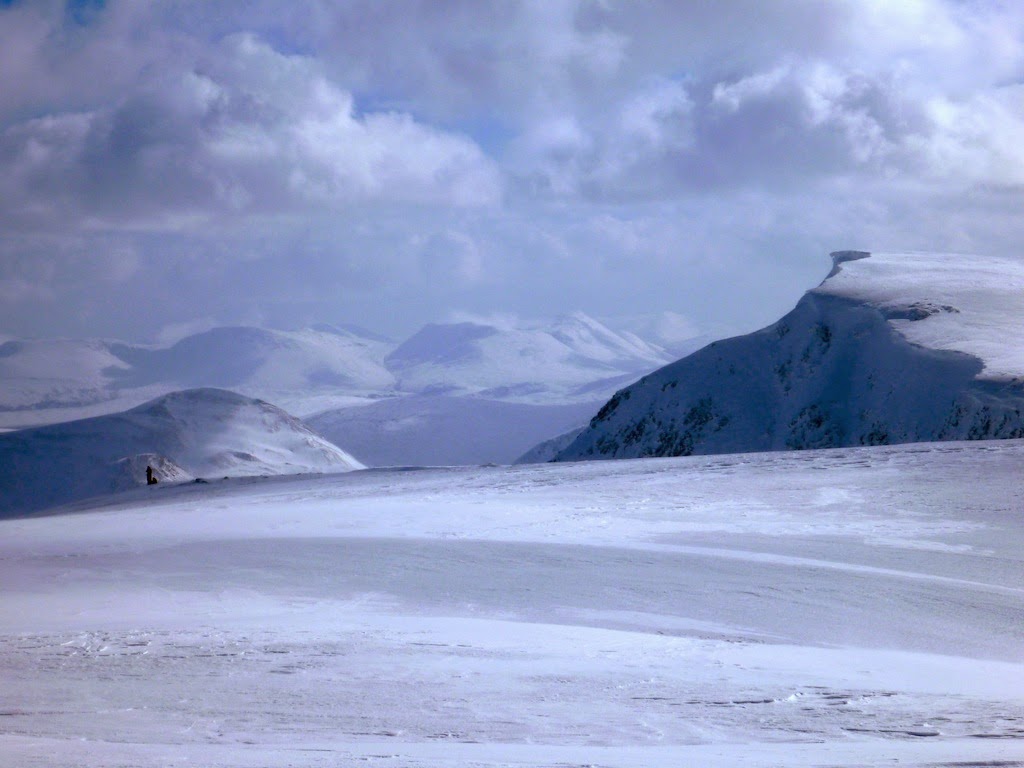 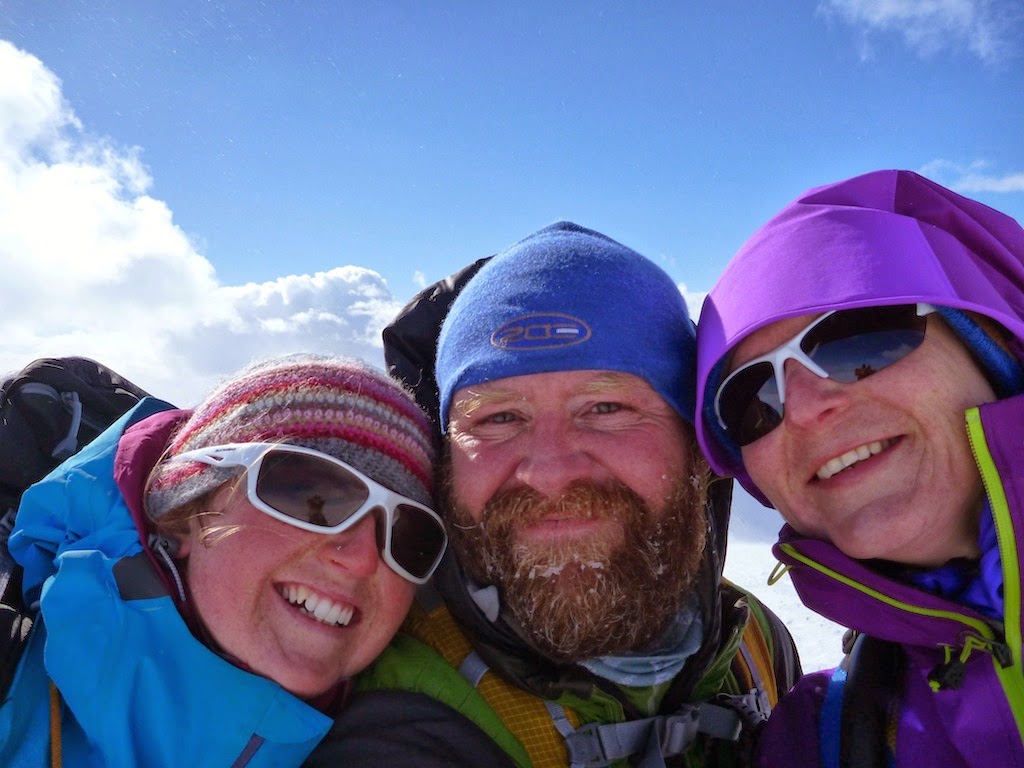 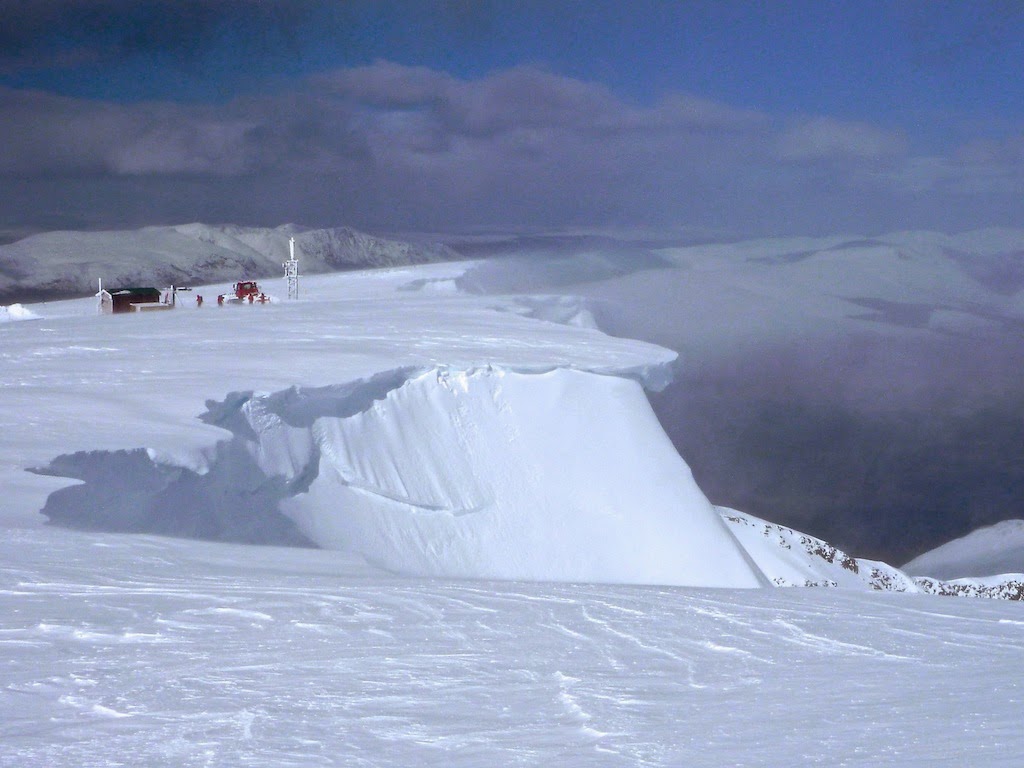 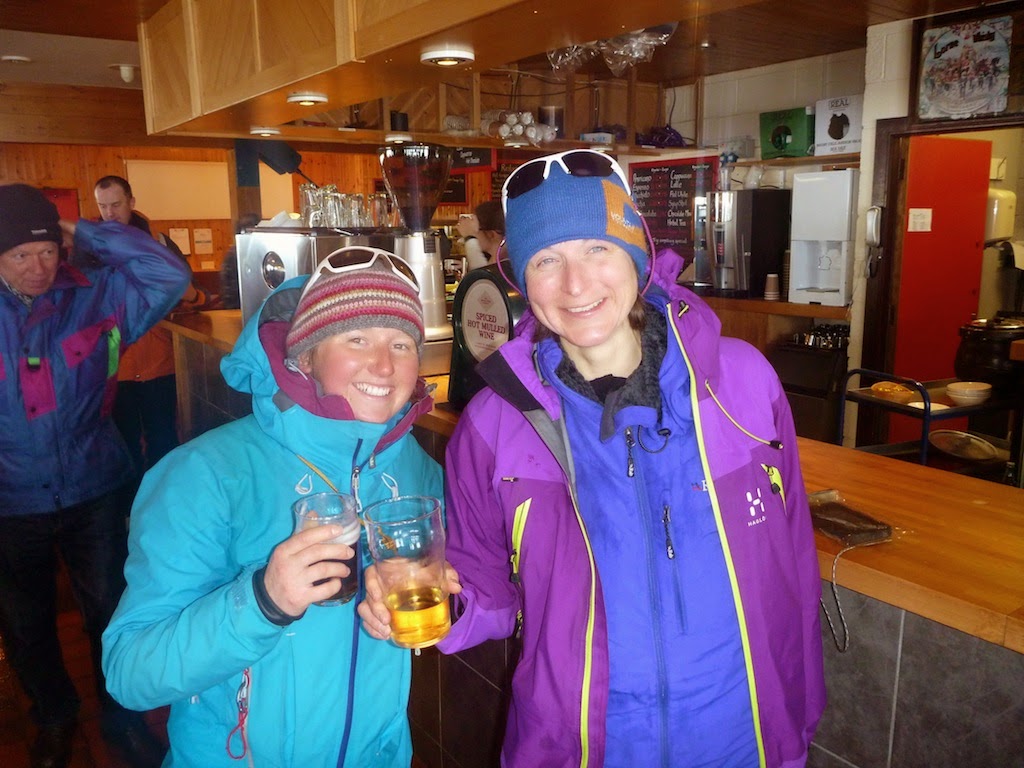