Love it when a plan comes together Stob Ban

I've been hiding. 4 days booked off in my diary before the bedlam of February (and March, and April from the looks of my diary) for a rest and maybe a climb. Well the climb didn't happen but i was glad not to be on the hill tues to fri last week.
So today came around with a marginally better forecast. I need a climb for Dave... III preferably, platy of pitches, safe approach, sheltered from the wind. East Buttress of the North Ridge of Stob Ban. We waded up the glen in snow blustery weather watching plumes blowing off of the the ridges and snow devils whirling on the westerlies. There was a surprising amount of ice around, icicles under banks and peat hags, ice on the path and even wet ice in a drainage line I've climbed before. We were getting gusts but nothing too bad and when we hit the bottom of the Buttress the snowmen was low enough down for us to take the chimney up the bottom tier directly. I've never done that before and it was GREAT FUN. Positive hooks and gear, chockstones frozen in and a couple of nice steep wee continuation walls again on brilliant hooks. From the flat platform I went up a steep turfy wee groove to give more III and then as the buttress broadened we increased the pace towards the top. The shattered tower that forms the crux of the easiest line was as much fun as I remembered and then there were just the 2 knife edges and the last wee long step right around the slab to go.
We knew we'd catch it a bit when we topped out and the hour and half descent wasn't especially pleasant- a couple of times we just stopped in a gust and hunkered down waiting until we could see and the beard gathered about a pound of wet snow ice. But Dave was heard to utter "That was fu@$*n' brilliant!" so all was well! 7 pitches of fun climbing and only a moderate kicking by the weather in descent. 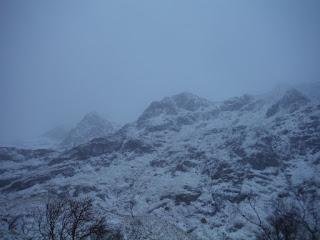 East Buttress of the North Ridge of Stob Ban 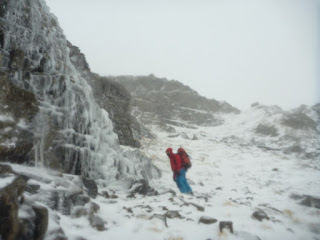 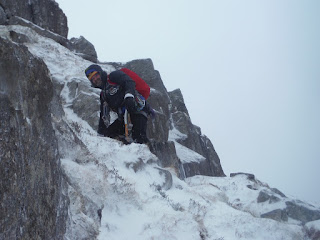 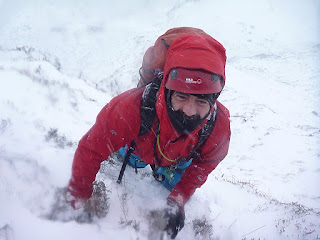 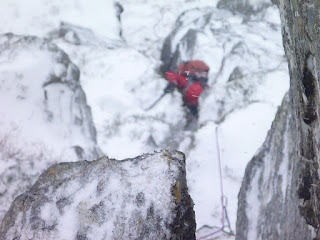 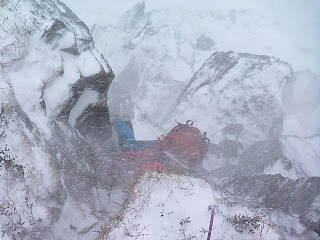 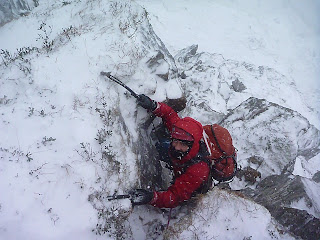 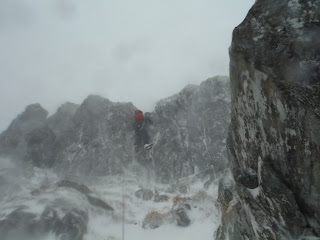 Whoops, this was steeper than expected ;-) 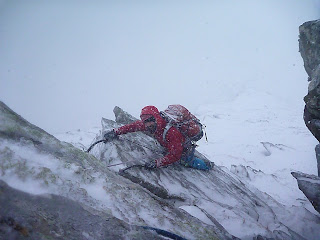 The shattered tower, the crux of the II/III route 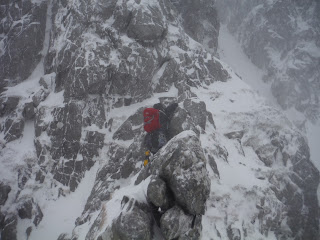 Getting a thread on one of the final knife edges 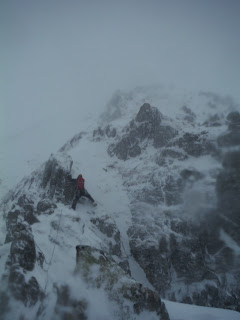 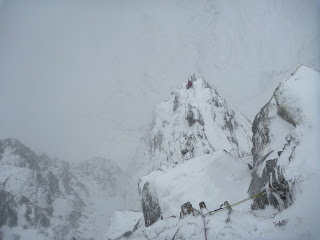 Climb when you're ready! 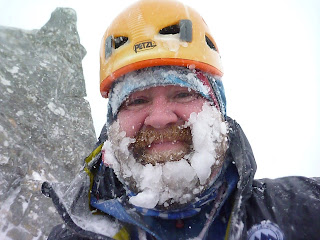