Today Dave, Iain and I headed for a quick day up to the east face of Aonach Mor. Guy and Alan had the same plan along with another pair (and since he was working and Alan had a chest infection we all decided to be kind and leave Left Twin to Guy). So the 3 of us opted to abseil Morwind following the footprints of a team who did so yesterday. The other pair of climbers opted to descend Easy Gully (which they said seemed fine for avalanche hazard but they weren't so convinced by the snow on the apron).
Its a few years since I climbed on the east face, put it down to a few winter of snowy conditions, westerlies and monster cornices, and it was nice to be back. 3 abseil saw us digging out a belay in the very snowy initial gully at the base of the route. I'd put in a request for the first pitch knowing it to be the crux and was soon engaged in the narrow chimney which wasn't as ice as hoped. Gear was a mediocre wire and a stubby screw before entering and a sling poked through a hole in the ice part way up. Then it was just commit, lean against the left wall and let my razor sharp new crampons bit the thin ice on the right whilst fishing for axe placements always 1 inch out of reach. It felt thin and a bit run out (especially for III,4) but a couple of solid hooks and a turf that was frozen enough for some big pulls soon saw we swimming up through a couple more awkward bulges (better gear if you dig for it) to a belay. The team that came down Easy Gully backed off something to the right reporting huge amounts of snow and returned up Easy Gully as I brought the guys up.
Iain dispatched the second pitch leaving Dave to demonstrate his flexibility with a drop knee into wide bridge to escape the cave and reach easier group on pitch 3. A fourth easy flounder saw us back over the cornice where Kenny was packing up having done a hybrid of Typhoon and Turf Walk. Guy and Alan waded up a very full looking Right Twin too.
As I say the first pitch is quite thin and not well protected. After that its better but the snow had buried a lot of evidence of yesterday's climbers so expect to dig!
Definitely mild today. It was snowing and misty but a sweaty walk up and raining gently in the car park (not as nice as forecast at all). Watch out for a period of instability towards the weekend if the thaw gets as vicious as I fear it might! 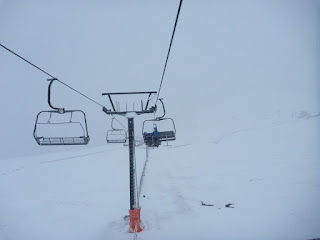 Hoorah for Nevis Range- Iain and his friends ;-) on the Quad Chair 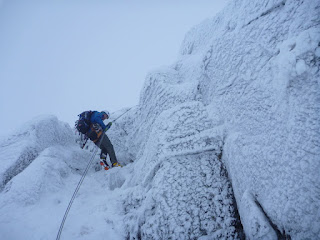 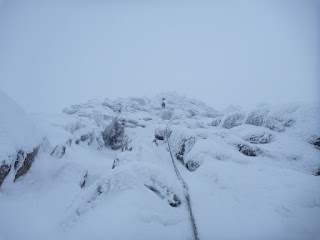 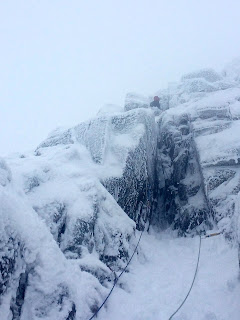 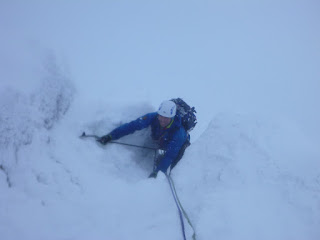 Iain following with a grimace... 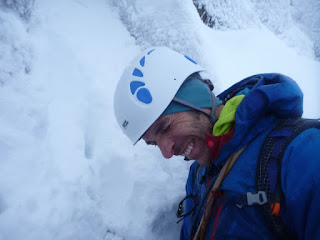 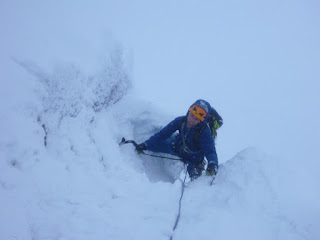 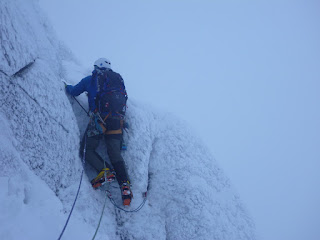 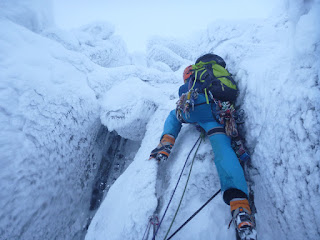 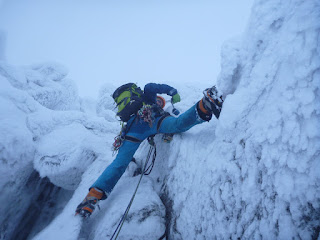 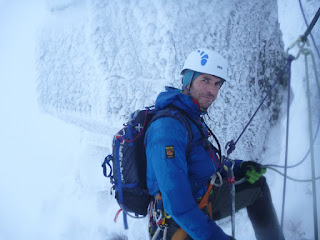 Iain hanging out on the east face of Aonach Mor
Posted by Alan at 17:04