Maybe it was the venison?

Maybe the venison I cooked last night was too pink... maybe it was the overindulgence of Christmas... or maybe the cracking pace Gill set was too tough for me but 3/4 of the way to the CIC Hut today she and Nigel were watching me retch into the gutter.
We got going again. skipped the Hut and kept the pace up into Coire na Ciste. It was damp. It was grey. But there was quite a bit more snow around than 3 days ago so we kept going. My panorama below, from the 29th, shows the line of No.2 Gully Buttress was complete then and I know it was climbed on the 30th so we went for a look.
A little care moving around some suspect snow in No. 2 Gully and Gill led an intro pitch up to the base of the crag. Her belay showed us a steep wee ice line line above and left. What do I always tell people? "Ice is always harder than it looks." I went for a look. Stood at the bottom I could see it was steep, thin and the screw I put in the bottom (we only brought 4 stubbies) wasn't filling me with comfort. "I know, 'JP is Back' is just to the left. I'll go for a look at that. It wasn't there. Or rather the line was but the ice wasn't. Great now I've got to reverse that rising traverse on cruddy snow, get my ice screw back and we all need to be about 20m lower to get back on line.
Crud reversed, screw recovered, spike lassoed, abseil conducted, belay dug out. No.2 Gully Buttress it is.
A nice wide start up soft but sticky snow ice (don't think much of that screw) to a steepening. EEEk! Big loose block! Leave that alone. Decent nut. Ice bulge and a screw that would be better if the ice wasn't undercut by a small cave. That hole does make a nice foot hold though.
Ping! Pang! Hmm, where'd the ice go. Shouldn't have bothered sharpening those picks this morning as I watch them spark on thinly covered rock.
Over the bulge. Snow ice is getting narrower... up a bit further... snow ice is getting cruddier. Front points skid out. EYES BULGE. Up.
Axe placement to placement searching out the best snow ice feet never biting quite as well as I'd like picks always slipping a little in the crud (Gill said hers felt secure- she's a lot lighter than me!).
Spike?! :-) No :-( Well kind of. Sling goes on, well packed with snow but not confidence inspiring. Snow bay in sight... left to the ledge or up? Up. 2 more steps. Phew.
Flounder to a belay.
A wee pitch from Nigel then another longer, better one from him on a mixture of cruddy ice and good snow. A mixed step, hop and skip and we're on top. Grade III? The climbing wasn't hard, just insecure and run out.
Maybe I'm getting old? Maybe it was the venison?

It was raining gently all the way to the top of No.2 today. Rimed up buttressed though. The areas around the base of Comb Gully and No.2 had some deep patches of suspect snow (it had a bit of energy in it, when we made it fail it wanted to propagate) but folk came up No.3 and No.4 was fine in descent today (almost complete). No.3 Gully Buttress was apparently busy. 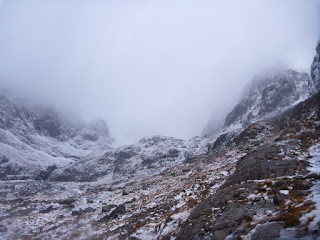 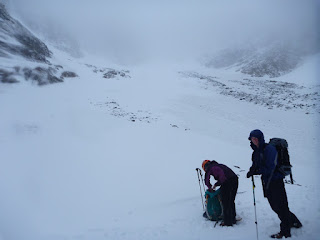 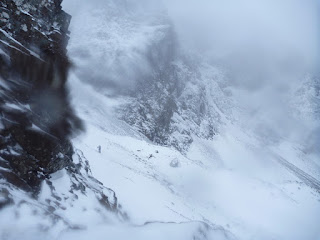 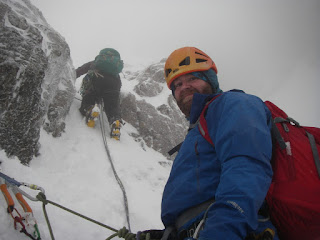 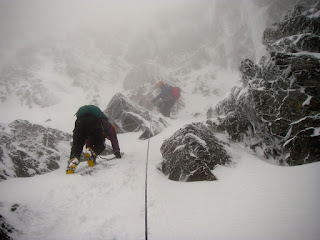 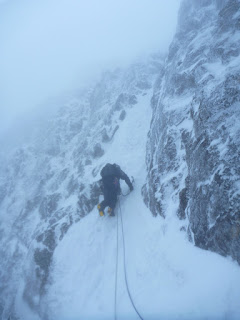 Nigel on the lead
Soggy on No.2 Gully Buttress today from Alan Halewood on Vimeo. 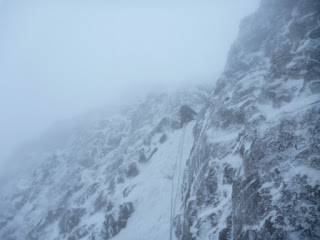 Disappearing into the murk 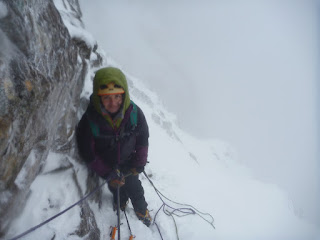