Sometimes the conditions don't make work any easier. I'm looking hard for opportunities for my team to get on the sharp end at II/III without falling into the trap of looking at the avalanche forecast and deciding to "just go for a look anyway" when the forecast clearly indicates a hazard.
Today a large Glenmore Lodge Team was heading west so we went too for the change. I went back to the rib next to Ruth's Gully (shall I call it Ruth's Rib?) which while escapable has definition and can offer climbing from I to III and isn't so far around the west face as Aonach Mor. That was important today as we were going to be going up on a 9:30 gondola and needed to be down on one before the last at 4:15 pm- not a lot of time! The other important fact was i new we'd be on the Rib below any defined avalanche hazard.
An early drive away from the Lodge and we were soon heading round to the west face in the tracks of others (early gondoliers heading for Golden Oldy?) their path descending into the Allt Daim was welcome but all too soon we had to turn sharply uphill to make the stiff 250m+ climb to the base of the Rib.
It was deep again. I'll leave it at that... but I hurt tonight.
The guys did great, we dug, waded and swam as quickly as possible and they got a good pitch each of leading on the way up and a bit of rapid rope work on my part and some soling saw us on the edge of the ski area with an hour to spare. This in turn allowed us to drop down for one last pitch which one the guys dispatched in style to give them their first taste of Grade III ground. Topped out again and down to top station for 3:55. Phew. We did have time to admire the views- but we had to wipe away the sweat to do it!
I've had a beer and an enormous portion of Lodge lasagna and feel a bit better now. My team did great today- really shifted when needed.
Ken abseiled in to Morwind- no i.e. but climbable. A team climbed Stirling Bridge and another reported sub optimal conditions on mid grade routes on the East side. Ledge Route sounds like it was busy and another Lodge team enjoyed the SW Ridge of the Douglas Boulder.
Tomorrow's avalanche forecast looks like pac man in stripes. Not helpful. 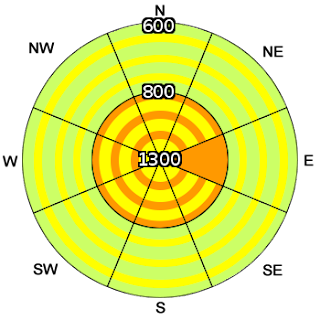 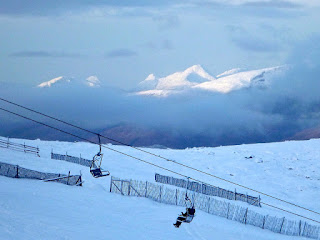 Ken and Tim heading for Morwind 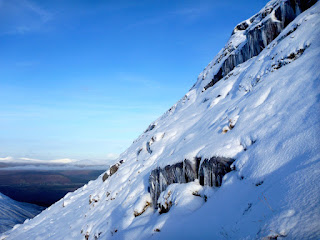 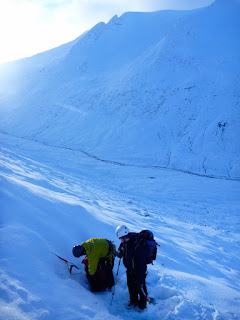 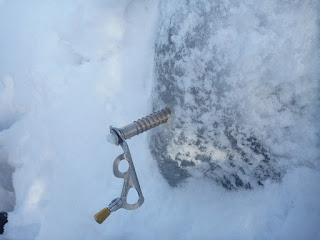 Enough ice to talk about screws! 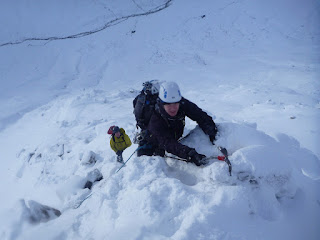 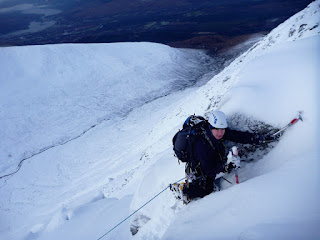 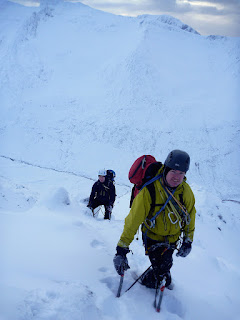 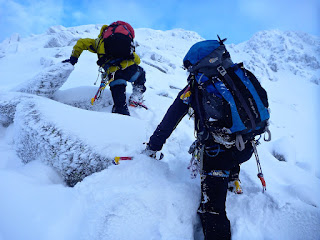 Thanks for breaking trail Kieran! 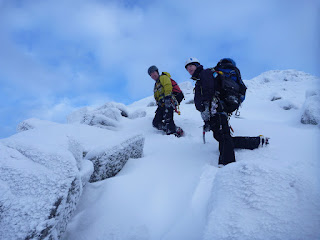 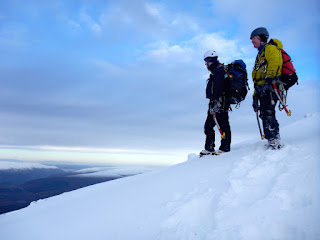 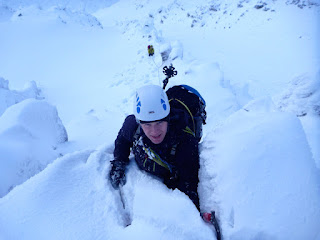 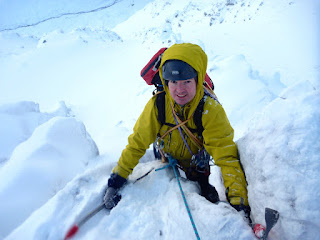 The other Kieran enjoying the fun 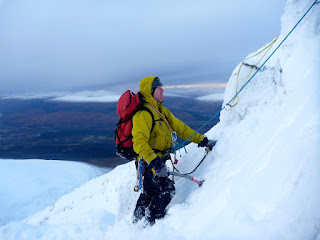