Last day of the year 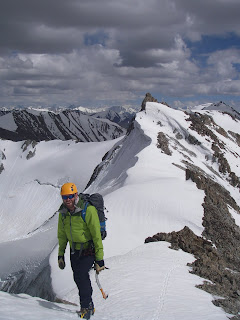 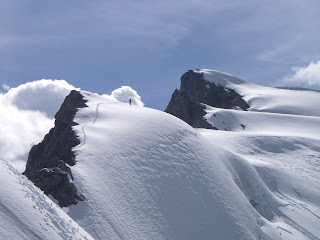 I had the morning free and was keen to get out despite the warm temperatures so I caught an early lift up the hill with Kenny (who was off to NE Buttress). Walking in it was mild but the lower ice has continued to hang in just- although it is water polished and will be very firm after tonights freeze.
I headed into Coire na Ciste and was attracted by the ice of Garadh Gully. I used to think of myself as a mixed climber but must admit to being recently attracted to big sexy flows of blue ice. I had a pleasant time going as directly up Garadh as I could- wherever I was in footprints the snow was firm but outside of old tracks I might go up to my thigh. At the top I decided to investigate Broad Gully. I'd never been there before but it looked from the Guidebook to give easy access to Subsidiary Tower Ridge and soon I was traversing onto the main Ridge just where I wanted to be. I downclimbed the lower section of the ridge passing 3 teams and by 1130 was back at the CIC hut. Here I found 3 slightly dis-spirited climbers who I regaled with tales of fat easy ice in the mist- hope they found it!
Oh well so much for 2010... 114 days of summer and indoor work or climbing, a month in Afghanistan and 2 new peaks, 27 winter days and a dozen on the bike. Thanks to all those who have shared it with me and especially Jane and my wee boy Sandy- both are great!
Now for a busy winter season with AMI workshops, Rjukan, a week's work in Spain, Glenmore Lodge, a hopefully good week on the Ben all to come. Its a great life if you don't weaken!

My First Project from Alan Halewood on Vimeo.

Kinetic watches are considered as great investment and energy-saving gadgets,
but the solar-powered models can easily compete with them.
For illustrative purposes, imagine you are faced with an important legal matter,
and it is up to you to choose the best lawyer, choose right and
walk away free, choose wrong and you may pay a
hefty fine, or worse. Keep in mind, that there are certain watch makers, who demand
top dollar, for their watches.

Feel free to surf to my site http://www.accademiadelbenessere-kondel.it/index.php?option=com_blog&view=comments&pid=17476&Itemid=0

These watches are designed to be loud and attractive. The hues range from subtle white or black to vibrant shades of red, orange, and yellow.
Another watch tipped by some fashionista's is the MK8160.